1.Dr Suman K. Berry will be the new Deputy Chairman of NITI Aayog 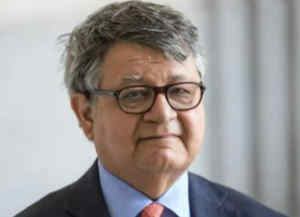 Dr Suman K. Berry has been appointed as the new Deputy Chairman of NITI Aayog . He will take charge from May 1. In the order of the Ministry of Personnel, Public Grievances and Pensions, it has been said that the current Deputy Chairman of NITI Aayog, Dr. Rajiv Kumar will be relieved of his post on April 30. Dr. Suman K. Berry has previously served as the Director General of the National Council of Applied Economic Research in New Delhi. It is one of the leading independent non-profit policy research institutes in the country. He has also served as a member of the Economic Advisory Council to the Prime Minister, the National Statistical Commission and the Technical Advisory Committee on Financial Policy of the Reserve Bank. 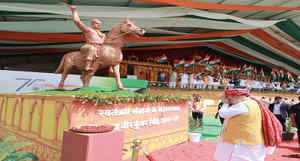 Bihar has created a world record for hoisting the national flag of 77 thousand nine hundred simultaneously in Jagdishpur on the occasion of Vijayotsav . Earlier this record was in the name of Pakistan , where 57 thousand six hundred and thirty two national flags were hoisted simultaneously in the year 2004. Victory festival by the great Indian freedom fighter Veer Kunwar Singh against the British on April 23, 1858 is being celebrated to commemorate the victory. Veer Kunwar Singh led the Indian Rebellion of 1857. The event was organized as part of the ongoing ‘Azadi Ka Amrit Mahotsav’ to acquaint the younger generation with their heroic deeds and fight against the British East India Company. Home Minister Amit Shah pays tribute to Babu Veer Kunwar Singh at the Vijayotsav function at Jagdishpur in Bhojpur district in Bihar. The Union Minister has announced that Veer Kunwar Singh Memorial will be constructed at Jagdishpur. To make the youth aware about the valor of freedom fighter Veer Kunwar Singh and his struggle against the British East India Company, the Vijayotsav has been organized under the Amrit Mahotsav of Azadi. 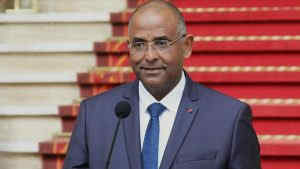 4.Incredible India International Cruise Summit on 14th and 15th May in Mumbai 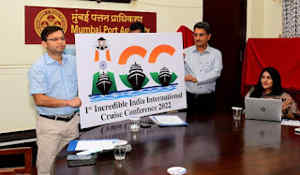 The Incredible India International Cruise Summit will be held in Mumbai on 14th and 15th May . This conference is being organized for the first time in the country. The Union Minister for Ports, Shipping and Waterways Sarbananda Sonowal made an announcement in this regard in Mumbai. The conference was organized by the Union Ministry of Ports, Shipping and Waterways , Mumbai Port Authority and the Confederation of Commerce and Industry of India – FICCI.are doing. Speaking at a press conference in Mumbai yesterday, Mr. Sonowal said that the Indian cruise industry is expected to grow tenfold in the next decade. He said that the Prime Minister’s Sagarmala campaign is working towards connecting the ports of Chennai, Visakhapatnam and Andaman with Goa. Most of the tourists come to these ports. Mr. Sonowal released the mascot of the conference – Captain Cruise, the logo and the brochure. He also launched the website of the conference – www.iiicc2022.in. The aim of this conference is to develop India as a cruise hub. Dr. Sanjeev Ranjan, Secretary, Ministry of Ports, Shipping and Waterways, Rajeev Jalota, Chairman, Mumbai Ports Authority and Sanjeev Bandopadhyay, Chairman, Inland Waterways Authority were also present on the occasion.

5.World’s largest electric three wheeler factory to be set up in Telangana 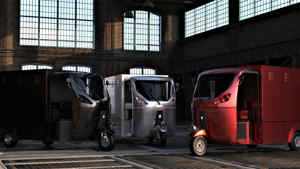 Ability Electric Inc. (Liability) , based in California , United States , has announced its intention to set up the world’s largest electric three-wheeler manufacturing facility in Telangana . The plant will be built in two phases over an area of ​​200 acres . 18000 Electric Vehicles (EV) per yearThe first phase of 13.5 acres with a production capacity of 13.5 acres will be commissioned in 2023 and the larger 200-acre facility with a production capacity of 240,000 EV per annum will be commissioned in 2024. The facility will produce all of Ability’s products, including the cargo model TaskmanTM and the passenger version UrbanTM. The facility is expected to attract private investment of USD 150 million (approximately Rs 1,144 crore) and is expected to create over 3000 jobs in Telangana. 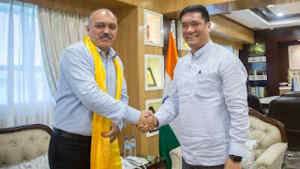 7.NITI Aayog will organize a one-day workshop on ‘Innovative Agriculture’ on April 25 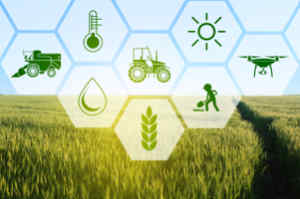 NITI Aayog is organizing a one day National Workshop on ‘ Innovative Agriculture ‘ on 25th April, 2022 under the Amrit Mahotsav of Azadi . Union Ministers Shri Narendra Singh Tomar and Parshottam Rupala, Gujarat Governor Acharya Devvrat and NITI Aayog Vice Chairman Dr. Rajiv Kumar, Aayog Member (Agriculture) Dr. Ramesh Chand and CEO Amitabh Kant will address the workshop. The workshop is expected to bring together stakeholders working in the field of innovative agriculture and natural farming practices from India and abroad. Major areas related to promotion of natural farming, soil health, impact and its role in mitigating climate change will be discussed. 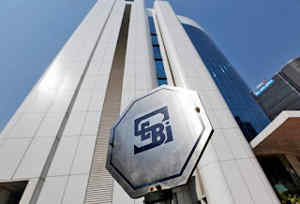 The Regulatory Benefits and Technology Solutions Advisory Council of the Securities and Exchange Board of India has been reconstituted as the Regulatory Benefits and Technology Solutions Advisory Committee (ALERTS) . The seven-member panel is now headed by Sunil Bajpaiwill do. According to SEBI website (TRAI), the advisory committee of ALeRTS will now be headed by Sunil Bajpai, former Principal Advisor (Information Technology) of Telecom Regulatory Authority of India. Puneet Narang, Head of Corporate Banking Technology India, Deutsche Bank, Girish Keshav Palshikar, Head Scientist, TCS Research & Innovation, Ratnakar Pandey, Senior Data Scientist at Amazon, Rohan Rao, Senior Data Scientist at h2o.ai, Subir Saha, Head of Compliance, ICICI Group and Sebi Chief Harini Balaji, General Manager (ISD), is among the other members of the committee. In December 2021, SEBI set up a seven-member committee for ALERTS, which was then headed by Madhabi Puri Buch, Who is currently the chairperson of the regulator. The committee’s mission is to make recommendations for future roadmaps and enhancements for various ongoing technology initiatives. He will also assist SEBI in designing and setting requirements for various internal systems. 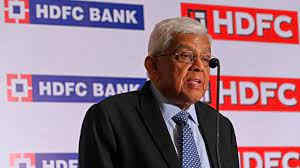 HDFC Ltd , a mortgage lender, announced the sale of 10% stake in its private equity arm, HDFC Capital Advisors , to a wholly owned subsidiary of Abu Dhabi Investment Authority (ADIA) for Rs 184 crore . ADIA is also the largest shareholder in HDFC Capital’s USD 3 billion alternative investment vehicles. HDFC Capital, which was incorporated in 2016, is the investment manager for HDFC Capital Affordable Real Estate Funds 1, 2, and 3. According to a statement by HDFC Ltd, this is in line with the government’s goal of increasing housing supply and supporting the Pradhan Mantri Awas Yojana – ‘Housing for All’ initiative.

Finance Minister Nirmala Sitaraman held virtual talks with several reputed US universities to explore the possibilities of setting up foreign universities and institutions at Gujarat International Financial Tech – GIFT City in Ahmedabad . Representatives from 14 universities of America participated in it. Considering the potential inherent in international financial services centres, this year’s budget paves the way for allowing world-class foreign universities to introduce courses in financial management, fintech, science, technology, engineering and mathematics in GIFT City Is. 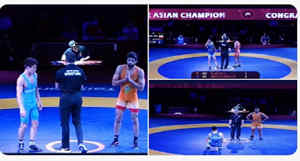 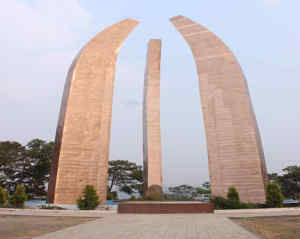 Khongjom Day is celebrated every year on 23 April in Manipur . The day was organized during the Anglo-Manipur War of 1891.In order to pay tribute to the warriors who fought in It is noteworthy that the Anglo-Manipur War was an armed conflict between the British Empire and the Kingdom of Manipur, which was fought from 31 March to 27 April 1891. The British Empire won the Anglo-Manipur War. This historic war started due to jealousy, discontent, distrust and discord among the princes of Manipur. After the death of the then Maharaja of Manipur, Chandrakirti Singh, his eldest son Surchandra assumed the throne in the year 1886. After Surchandra came to power, discord started between the princes. Taking advantage of the internal dissatisfaction of the royal family, the British government began to openly intervene in the administration of Manipur. In fact, the British government wanted to keep Manipur under its control from the very beginning, But till now it was not possible. This war was fought at Kheba hills of Khongjom in Manipur and hence the name of this day is Khongjom Day. After the end of the war on 27 April 1891, Manipur came under direct control of the British. During this war, the British government prosecuted many people and sentenced them to death. 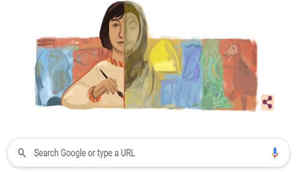 On April 23, 2022 , Google named Iraqi artist, educator and author, Naziha Salim.A doodle was made in his honor. The doodle is a tribute to Salim’s painting style and his contribution to art. Salim was born in Turkey in 1927 to an Iraqi family. His father was a painter and his mother was a skilled embroidery artist. Salim’s three brothers worked in the arts. His brother Jawad was widely regarded as one of Iraq’s most influential sculptors. meanwhile, His other two brothers – Suad Salim was a designer and Rashid was a political cartoonist. Salim studied painting and graduated from the Baghdad Institute of Fine Arts. Due to his hard work and passion for art, he secured a scholarship to continue his education in Paris at the cole Nationale Superiere des Beaux-Arts. Salim was one of the first women to receive the scholarship. She was also active in the arts community of Iraq. Salim was one of the founding members of al-Ruwad. It is a community of artists who study abroad and incorporate European art techniques into Iraqi aesthetics. He died in Baghdad on February 15, 2008.