Tendulkar lends support to women cricket – Indian cricket legend Sachin Tendulkar said he is excited about the ICC Women’s World Cup scheduled later this year as the event has a big role to play in globalising the game.

The Congress on Friday demanded the setting up of a parliamentary committee to probe the circumstances surrounding the death of Malapuram MP and Indian Union Muslim League (IUML) national president E. Ahamed.

The Jamaat-ud-Dawa has resurfaced under a new name of ‘Tehreek Azadi Jammu and Kashmir’, days after its chief Hafiz Saeed was put under house arrest and a crackdown launched on the organisation’s activities.

Tamil Nadu may see a change of guard as a section of ruling AIADMK MLAs are likely to urge Ms. Sasikala, a close aide of late Jayalalithaa, to take over the reins of the government at a meeting in Chennai on Sunday.

With the oil spill off the Chennai coast raising concerns, the Centre said a total of 65 tonnes of sludge has been removed so far and over 90 per cent of the work completed.

Legal battles are playing out across the U.S. as opponents of President Donald Trump’s travel ban on citizens from seven predominantly Muslim nations take their fight to the courtroom.

China on Friday signalled that it had not imposed any pressure on Pakistan to put Hafiz Saeed under house arrest, but has decided to send a top diplomat to Islamabad following the detention of the suspected mastermind of the Mumbai terror attacks in 2008.

The UN has removed Afghan warlord Gulbuddin Hekmatyar from its list of designated terrorists, lifting the assets freeze, travel ban and arms embargo imposed on the insurgent leader who has signed a peace pact with the government.

New York Governor Andrew Cuomo says a 4-month-old Iranian infant banned from entering the United States for life-saving heart surgery under President Donald Trump’s order will now be allowed to travel to New York for the emergency procedure.Mr. Cuomo announced on Friday evening that Manhattan’s Mount Sinai Hospital will perform the surgery at no cost.

Punjab and Goa will go to the polls on Saturday, setting off multi-phased Assembly elections in five States.Arch-rivals BJP and Congress will battle it out in the two States, with Arvind Kejriwal’s AAP making its debut. 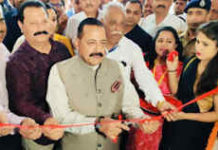