1. Kuno Wildlife Sanctuary is located in which among the following states in India?

A.Maharashtra
B. Madhya Pradesh
C. Uttar Pradesh
D. Rajasthan
E. None of these

Explanation: Kuno Wildlife Sanctuary is situated in Madhya Pradesh and it has been upgraded to a national park in 2018. Initially, it was established in 1981. In the protected area of this wildlife sanctuary, there are predators such as the Indian leopard, cheetah, sloth bear, Indian wolf etc. This site has been chosen earlier as an area of Asiatic Lion Reconstruction Project and Cheetah Reconstruction Projects.

2. Bharat Ratna Shri Atal Bihari Vajpayee Ekana Cricket Stadium is situated in which among the following places in India?

Explanation: Bharat Ratna Shri Atal Bihari Vajpayee Ekana Cricket Stadium is located in Lucknow, Uttar Pradesh. It is known as the third largest international cricket stadium in the country and it has a seating capacity of 50000. This stadium is run by public-private partnerships and it was inaugurated in 2017.

3.Which among the following is the highest dam in India?

Explanation: Tehri Dam in Uttarakhand is the highest dam situated in India whereas the longest dam in India is Hirakund Dam in Odisha. Bhakra Dam in Punjab is the highest straight gravity dam in the country whereas Kallanai Dam in Tamil Nadu is the first dam of India.

4.Which among the following is NOT correctly matched?

5.Papikonda National Park is situated in which state in India?

Explanation: Papikonda Nation Park is situated in the Papi Hills in the West Godavari District and East Godavari District of Andhra Pradesh. It was upgraded to a national park in the year 2008 though it was first started as a wildlife sanctuary in 1978. This national park is home to some of the endangered species in the world along with various flora and fauna species.

6.Kempegowda International Airport is situated in which among the following places in India?

7.Which among the following does NOT have its headquarters based in Geneva, Switzerland?

Explanation: The International Atomic Energy Agency is situated in Vienna, Austria whereas all the other international organizations are based in Geneva, Switzerland. IAEA is an organization that seeks to promote the peaceful use of nuclear energy in the world and it was established as an autonomous body in July 1957. The IAEA reports to both the United Nations General Assembly and United Nations Security Council.

8.The National Atlas and Thematic Mapping Organization is situated in –

Explanation: The National Atlas and Thematic Mapping Organization is situated in Kolkata, West Bengal, and the main objective of this organization is to provide maps to the administrators, planners, researchers, students, etc. for various purposes. It was first started in 1954 but later it was renamed as the NATMO in the year 1978.

9.The Heritage Site of the Group of Monuments at Pattadakal is located in which among the following states in India?

Explanation: The Group of monuments at Pattadakal are Hindu and Jain Community temples constructed in the 7th and 8th Century by the Chalukya Kings. UNESCO has designated it as a World Heritage Site because of the congregation of the art forms of both Northern India and Southern India. This site is protected under the Indian Law and is managed by the Archeological Survey of India (ASI).

10.Which among the following is NOT an Indian city situated on the bank of the River Ganges? 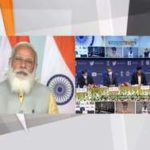