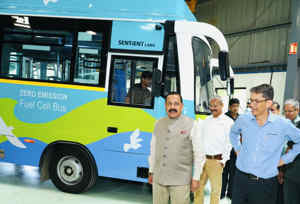 Union Minister Dr. Jitendra Singh launched India’s first indigenous hydrogen fuel cell bus developed by KPIT-CSIR in Pune . Council of Scientific and Industrial Research (CSIR) and private firm KPIT Ltd. This bus developed by was displayed in Pune. Dr. Jitendra Singh explained that the fuel cell uses hydrogen and air to generate electricity to power the bus and the bus carries only water so it is probably the most eco-friendly mode of transport. In comparison, a diesel bus plying on long-distance routes typically emits 100 tonnes of CO annually and there are over one million such buses in India. He said that the operating cost of hydrogen fuel cell trucks is less as compared to trucks running on diesel and this can revolutionize freight movement in the country. Jitendra Singh says, about 12-14 percent of CO2 emissions come from diesel-powered heavy vehicles. Hydrogen fuel cell vehicles provide an excellent means to eliminate on-road emissions in this area. 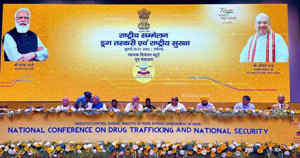 A first-of-its-kind portal has been launched for various central and state agencies tasked with enforcing anti-drug laws in the country . Through this portal, any agency can get the history, personal information of the offender, fingerprints and details of court cases related to drug trafficking from any part of the country . The ‘ Nidana ‘ or ‘ National Integrated Database on Arrested Narco-Offenders ‘ has been developed by Narcotics Control Bureau (NCB) . This is part of the Narcotics Coordination Mechanism (NCORD) portal which was launched by Home Minister Amit Shah in Chandigarh .Started on 30th July. Diagnostics takes data from ICJS (Inter-operable Criminal Justice System) and ‘e-Prison’ register and plans to link it to the Crime and Criminal Monitoring Network System or CCTNS.

3.Union Government has given GI tag to Mithila Makhana 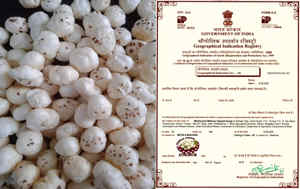 The Central Government has given GI tag to Mithila Makhana . With this, the growers will get maximum value of Makhana product. This decision will benefit more than five lakh farmers of Mithila region of Bihar . If a product gets GI tag, no person or company can sell similar material under the same name. This tag is valid for ten years and can be renewed later. Other benefits of GI registration include legal protection to that material, prevention of unauthorized use and promotion of exports. 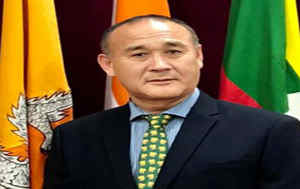 BIMSTEC Secretary General Tenzin Lakfel will arrive in Delhi on a four-day official visit . He is visiting India at the invitation of Saurabh Kumar , Secretary in the Ministry of External Affairs . Secretary-General Tenzin Lekfell will hold discussions with senior officials from India on taking the BIMSTEC organization forward. India leads the security cooperation on the BIMSTEC platform which includes disaster management, maritime cooperation and energy security. BIMSTEC leaders of seven countries held the 5th summit in Colombo on 30 March this year.The BIMSTEC Charter was approved during The Secretary General of the BIMSTEC Group, Tenzin Lakphel, will be visiting India from 22 to 25 August. The BIMSTEC grouping includes Bangladesh, Bhutan, India, Myanmar, Nepal, Sri Lanka and Thailand.

5.Maharashtra government will take a loan of four thousand crore rupees from the Asian Development Bank for the establishment of a medical college. 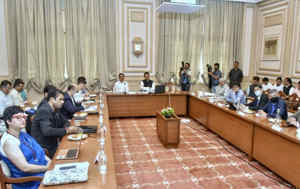 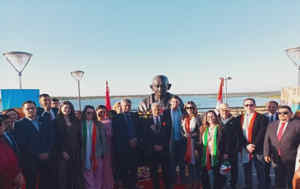 External Affairs Minister Dr S. Jaishankar unveiled the bust of Mahatma Gandhi at Asanción , Paraguay . He appreciated the decision of Asnshion Municipality to place this statue at the main site of the city. Dr Jaishankar said in a tweet that this is an expression of our solidarity, which expressed even stronger during the Kovid epidemic. The foreign minister also visited the historic Casa-de-la Independencia , where Paraguayan’s independence movement began two centuries ago . The External Affairs Minister said that this is a fitting testimony to our shared struggle and developing relationship.

7.US announces military package for Ukraine 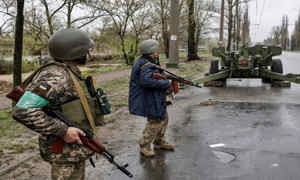 US announces USD 775 million military aid package in line with its promise to provide all possible assistance to Ukraine in Ukraine-Russia waris of. The assistance would include “additional weapons, munitions and equipment”. The USD 775 million aid package will include 15 Scan Eagles, 40 mine-resistant, ambush-protected vehicles known as MRAPs, including mine-clearing rollers, and 2,000 anti-armor rounds, which will be carried by Ukraine. Can help troops advance to the south and east, where Russian forces have placed mines. That aid package also includes 1,500 anti-tank missiles, 1,000 Javelin missiles and an undisclosed number of high-speed, anti-radiation or HARM missiles targeting radar systems. In addition, the US is shipping 40 heavily armored Maxxpro Mine Resistant Vehicles, which were originally developed for the US military in Iraq. The latest aid comes as the Ukraine-Russia war approaches six months. This brings total US military aid to Ukraine to about $10.6 billion since the beginning of the Biden administration. The Pentagon has provided Ukraine with equipment from Defense Department stocks for the 19th time since August 2021.

8.Banks’ progress in recent years is not enough for the existing good governance structure – Reserve Bank of India 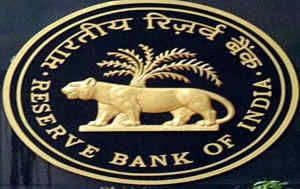 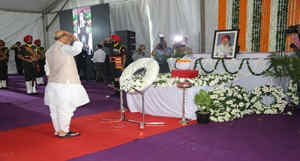 10.More than one lakh villages in the country become ODF Plus 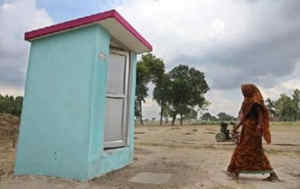 More than one lakh villages of the country have declared themselves as ODF Plus . Ministry of Jal Shaktihas said that these villages have consistently maintained their level of open defecation free. They have put in place systems for solid and liquid waste management. These villages are working towards making themselves more clean, green and healthy. Telangana, Tamil Nadu, Odisha, Uttar Pradesh and Himachal Pradesh are the five major states where maximum villages have been declared ODF Plus. Prime Minister Narendra Modi started the Swachh Bharat Mission eight years ago. Its goal was to make the villages of the country open defecation free. According to the ministry, the Swachh Bharat Mission Gramin has further strengthened the government’s commitment to improving the quality of life of citizens and to health and sanitation. 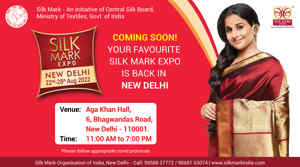 The Union Minister of State for Textiles , Darshana Jardosh inaugurated the exhibition named Silk Mark Expo in New Delhi . The exhibition was organized by the Central Silk Board under the Ministry of Textiles . It will be in place till August 28. Referring to the finest silk products in the exhibition, the Minister of State for Textiles said that the weavers, especially the women artisans, have put in their best efforts to create garments made of pure silk, which will appeal to the consumers from all over the country. The aim of organizing the Silk Mark Expo exhibition is to maintain the value chain of all stakeholders along with silk consumers. This time 39 exhibitors from 12 states are participating in the exhibition. 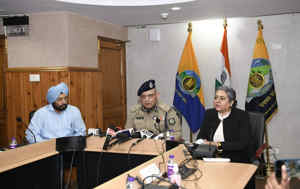 The 10th National Conference of Women Police is starting in Shimla . More than two hundred women police officers and personnel will participate in this two-day meeting. It is organized by the Ministry of Home Affairs and Bureau of Police Research and Development in collaboration with Himachal Police . Union Minister of State for Home Nityanand Rai will inaugurate the conference. The main objective of the meeting is to increase the leadership capacity of women police officers and to deliberate on their problems and challenges. The new role and responsibilities of women police in the context of changing technology and modes of crime will also be considered. State Director General of Police Sanjay Kundu said that at present the strength of women personnel in Himachal Police Force is 13 per cent and women quota in police has been increased to 25 per cent. 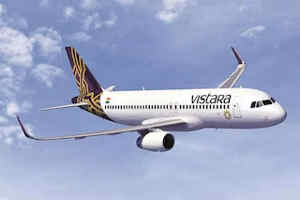 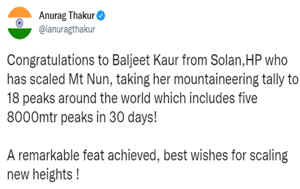 Information and Broadcasting Minister Anurag Thakur has congratulated Baljeet Kaur of Solan , Himachal Pradesh for climbing Mount Nun . In a tweet, he lauded Baljit Kaur for achieving the remarkable feat. With this success, Baljit Kaur has scaled 18 peaks across the world . These include the mountaineering of five peaks eight thousand meters high in 30 days .

15.Haryana’s last Panghal became the first Indian woman wrestler to win a gold medal in the Under-20 World Wrestling Championship 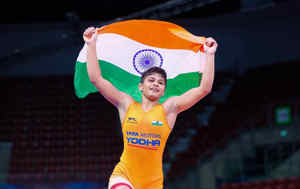 Haryana ‘s 17-year-old Last Panghal has become the first Indian female wrestler to win a gold medal at the Under-20 World Wrestling Championships in Sofia , Bulgaria . She defeated Etlin Shagayeva of Kazakhstan by eight-nil in the 53kg category . This gold medal is historic for India as India had not yet won any gold medal in women’s wrestling of the Under-20 World Championships. Last Panghal is a resident of Bhagana village of Hisar district in Haryana. Sonam Malik in 62 kg and Priyanka in 65 kg categoryWon silver medal .

16.India won the gold medal in the doubles match of the Thailand Para Badminton International Tournament 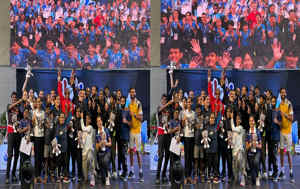 17.International Day of Remembrance and Tribute to the Victims of Terrorism

Every year 21 August is observed by the United Nations as the International Day of Remembrance and Tribute to the Victims of Terrorism . This day is celebrated around the world to honor, support and help those injured, killed, victims and affected due to terrorism. The third day is being observed this year, which will focus on several memorials and the response to the pandemic, as it is important to take the time to remember and honor the victims of terrorism. The United Nations General Assembly in 2017 through its resolution 72/165 (2017) decided to observe 21 August as the International Day of Honor, Support and Assistance to the Victims, Victims and Affected by Terrorism Worldwide was. This day was first celebrated in 2018. 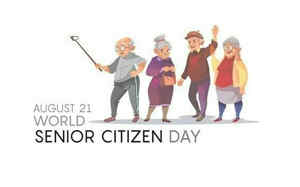 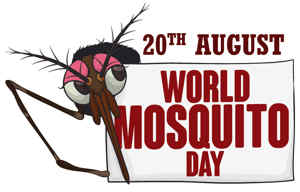