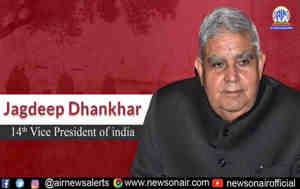 Shri Jagdeep Dhankhar will be the 14th Vice President of the country . NDA candidate Jagdeep Dhankhar got 346 votes more than the opposition candidate Margaret Alva . Lok Sabha Secretary General and Election Officer Utpal Kumar SinghMr. Dhankhar got 528 votes and Mrs. Margaret Alva got 182 votes out of total 780 votes. He said that 15 votes were found to be invalid. Janata Dal United, YSRCP, Bahujan Samaj Party, All India Anna DMK and Telugu Desam Party extended support to Mr. Jagdeep Dhankhar. UPA candidate Margaret Alva got the support of Aam Aadmi Party, TRS and Jharkhand Mukti Morcha. The Trinamool Congress had decided not to participate in the elections. The tenure of current Vice President M Venkaiah Naidu ends on 10th of this month. Jagdeep Dhankhar was born on May 18, 1951 in Rajasthan (Jhunjhunu) . He did his early education from Sainik School, Chittorgarh. Later he completed his graduation from Rajasthan University. He was from Jhunjhunu from 1989 to 1991 .Lok Sabha MP from Janata Dal . In addition, from 1993 to 1998 he represented Kishangarh as an MLA in the Rajasthan Legislative Assembly . From July 30, 2019 till now, he is serving as the Governor of West Bengal . Dhankhar has become the second Vice President from Rajasthan after Bhairon Singh Shekhawat .

2.Prime Minister Narendra Modi congratulates Ferdinand Marcos on the victory in the Presidential election of Philippines 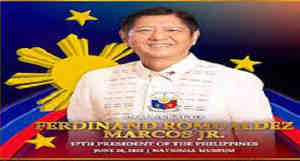 Prime Minister Narendra Modi had a telephonic conversation with the President of the Philippines , Ferdinand Marcos , and congratulated him on his victory in the presidential election. He will be the 17th President of the Philippines . The two leaders reviewed various areas of bilateral relations and expressed satisfaction at the extensive cooperation between the two countries in recent years.

3.China announces suspension of cooperation with US over Nancy Pelosi’s visit to Taiwan 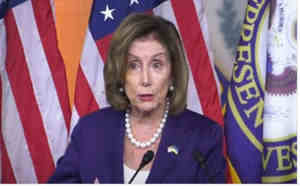 China has announced a halt to cooperation with the US in protest against the visit of US Senate Speaker Nancy Pelosi to Taiwan . These include a ban on mutual talks between the two countries in many areas, including senior military commanders and climate change talks. China’s Foreign Ministry said that China is also suspending cooperation with Washington on the prevention of cross-border crime and drug trafficking and the return of illegal immigrants to the United States. Soon after Pelosi’s visit to Japan ended, China also canceled a bilateral meeting with the US on the Maritime Military Security Mechanism. Pelosi is the highest ranking US official to visit Taiwan in 25 years.

4.MoU between the Indian Navy and the Center for Space Applications (ISRO) for cooperation on satellite based naval applications in ocean science and meteorology 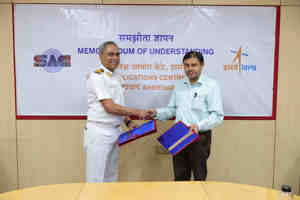 The Indian Navy on 5 August 2022 launched the Space Applications Center (ISRO), Ahmedabad on data sharing and collaboration on satellite based naval applications in oceanography and meteorology .signed a Memorandum of Understanding with With this initiative, both the organizations will have a common platform of mutual cooperation, in which the scientific progress made by SAC will be synergized with the efforts of the Indian Navy, which will help the defense of the country with the rapid development of satellite data retrieval and applications. To maintain the defense of the country. This MoU is an extension of the previous MoU signed in 2017 and will take forward the cooperation between the two organizations. The broad areas of cooperation include sharing of non-confidential observational data, use of meteorological information generated from SAC in military operations and processing of satellite data for the development of new instruments, calibration and validation of ocean models, subject matter experts (SMEs) provision is included.

5.Ranjit Rath takes over as chairman of Oil India 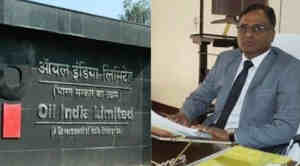 6.Vodafone Idea’s current CEO Ravinder Takkar will be the new chairman of the company 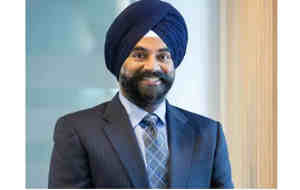 The Board of Directors of Vodafone Idea (VI) has appointed Ravinder Takkar , Managing Director and Chief Executive Officer (CEO) of the company as the new Chairman of the company. Ravinder Takkar will replace Himanshu Kapania on August 19. However, he will continue to be a part of the VIL board as a non-executive director. Vodafone Idea said in a statement about two weeks ago that it has decided to appoint Akshay Mundra as its next Chief Executive Officer (CEO). Akshay Mundra will take over on 19 August 2022 and will replace the current CEO Ravindra Takkar. 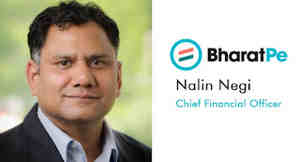 Fintech platform BharatPe said it has appointed former SBI Card CFO Nalin Negi as its new Chief Financial Officer. BharatPe is preparing for its Initial Public Offering (IPO). In his new role, Negi will take charge of the finance function for BharatPe and work towards making the company EBITDA positive by March 2023.

8.’My Handloom My Pride Expo’ 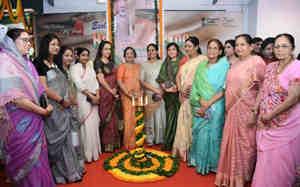 The Minister of State for Textiles and Railways inaugurated the ‘ My Handloom My Pride Expo ‘ in New Delhi (Janpath) on 5th August, 2022 to encourage the handloom industry .‘ inaugurated. On this occasion, he invited all the women parliamentarians to visit the special handloom expo at Janpath Haat and witness the rich handloom heritage with the aim of encouraging weavers and promoting the industry. The exhibition will be open to the public from 11 am to 8 pm till August 11, 2022. This special handloom expo is an initiative of the Office of the Development Commissioner (Handlooms), Ministry of Textiles, Government of India through National Handloom Development Corporation (NHDC) Limited. The Swadeshi movement which started on August 7, 1905, encouraged indigenous industries and especially handloom weavers. For this purpose, from the year 2015, the Government of India has decided to celebrate 7 August every year as ‘National Handloom Day’. Handloom weaving is associated with the traditional value of the art and each region has its excellent varieties. Pochampally, 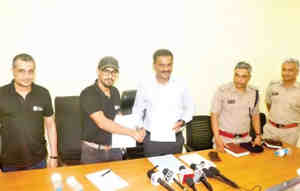 The MoU will build on a public-private partnership between 5ire and Goa Police to implement smart policing solutions to improve transparency and efficiency in policing. Goa Police announced that it has signed a Memorandum of Understanding (MoU) with Level-1 Blockchain Network, 5ire, to digitize its processes. The MoU was signed on behalf of Goa Police by SP Crime, Nidhi Valsan, IPS, and 5ire founder and CEO Prateek Gauri. With this MoU, Goa will become the first police state in India to go completely paperless. 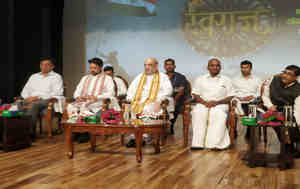 Home Minister Amit Shah launched Doordarshan ‘s mega historical Hindi serial ” Swaraj , the overall saga of India’s freedom struggle ” in New Delhi . This 75-episode series will bring to the fore the untapped aspects of the glorious history of India’s freedom struggle. Home Minister Amit Shah said that the effort of Swaraj series is to make Indians proud of their culture, values ​​and ancient texts. He urged the youth to take pride in the ancient culture and history of the country.

National Award for Senior Citizens Vayoshreshtha Samman-2022 by Ministry of Social Justice and EmpowermentNominations are invited for On the occasion of International Day of Older Persons on October 1, this award will be given to people working for the cause of senior citizens. It was adopted by the United Nations General Assembly by a resolution on 1 October 1999 to celebrate the International Day of Older Persons. Since the year 2013, Vayoshreshtha Samman has been conferred in 13 different categories. The Vayoshreshtha Samman was instituted by the Ministry of Social Justice and Empowerment in the year 2005 and was brought in the category of National Awards in the year 2013. It provides an opportunity to the younger generation to understand the contribution of elders in building the society and nation. Nominations are invited for this award from the Ministries/Departments of the Government of India and their autonomous organizations.

Indian Institute of Technology Kanpur and National Payments Corporation of India (NPCI) have signed a Memorandum of Understanding (MoU) to collaborate on the development of indigenous digital payment solutions. This collaboration will also help in enhancing cyber security controls for products and services of NPCI and its subsidiaries. Under this agreement, IIT scientists will advise NPCI personnel on cyber security and present new trends in Artificial Intelligence (AI), Machine Learning (ML), security product roadmap and Distributed Ledger Technology (DLT). The MoU will motivate NPCI and IIT Kanpur to work together on various projects. 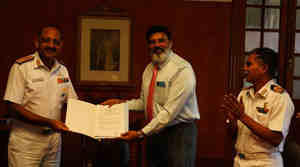 The Indian Institute of Science (IISc) and the Indian Navy have signed a Memorandum of Understanding to collaborate on aviation research and development and to accelerate the efforts of the Indian Navy to become self-reliant under ‘ Aatmanirbhar Bharat ‘. Bengaluru-based IISc said in a statement that the MoU signed on 29 July will provide a formal basis for the Indian Navy to interact with the relevant faculty members at IISc and promote joint research programs in areas of mutual interest.

14.Amazon India ties up with Indian Railways for delivery of goods 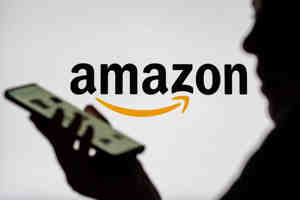 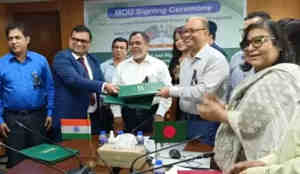 Indian Oil Corporation Limited (IOCL) has signed a Memorandum of Understanding (MoU) with the Department of Roads and Highways in Dhaka for emergency transportation of petroleum products to the northeastern states of India through the territory of Bangladesh.can be done. The Indian High Commission in a tweet said that this is an interim setup to help in the immediate supply of petroleum products due to the damage caused by the floods in Assam this year. The petroleum tankers from Assam will go to Tripura via Meghalaya and then through the territory of Bangladesh. As per the MoU, IOCL will bear all administrative charges and local taxes including road usage charges for Bangladeshi territory and use of highways. Even a few years ago, transport fuel and other petroleum products were transported to the northeastern states via Bangladesh, when railway tracks and roads were badly damaged by heavy rains, floods and landslides. 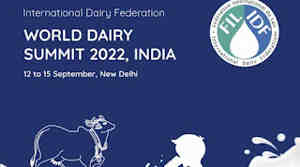 The International Dairy Federation World Dairy Summit (IDF WDS 2022) , is scheduled to be held in New Delhi from 12 September . India would like to improve its milk productivity per animal by taking lessons from advanced countries. After two years due to the COVID-19 pandemic, the 2022 edition of the summit will be held in person from 12-15 September. According to the leaders of the dairy sector, this summit with the theme of “livelihood and nutrition” will be a significant achievement for the country. Earlier, India had hosted the International Dairy Congress in 1974. It should be noted that India is the largest milk producing country in the world. 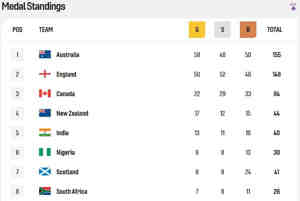 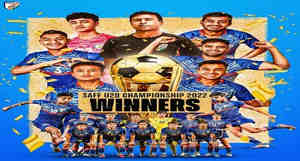 India has won the title of U-20 SAFF Football Championship . India defeated Bangladesh 5-2 in the final played at the Kalinga Stadium in Bhubaneswar . The match was decided in extra time. Gurkeerat Singh scored four, while Himanshu Jhangra scored one goal. India has won the tournament title for the second time in a row.