1.PM Imran Khan ousted from power in Pakistan after defeat on no-confidence motion 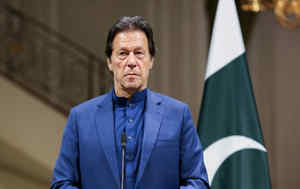 Imran Khan has been removed from the post of Prime Minister after the defeat in the vote of no confidence against the government in Pakistan . In the National Assembly of 342 members, 174 votes were cast in favor of the motion. Minutes before the start of voting, National Assembly Speaker Asad Qaiser and Deputy Speaker Qasim Suri resigned. Members of the ruling Pakistan Tehreek Insaf Party were not present during the voting . Ayyaz Sadiq of Pakistan Muslim League-Nawaz , who is handling the Speaker’s responsibility for conducting the proceedings of the National Assembly, announced that the no-confidence motion against Imran Khan would be passed with a majority. Earlier, the proceedings of the House had to be adjourned several times. Imran KhanHe is the first prime minister in the history of Pakistan who has been removed from office through a no-confidence motion . 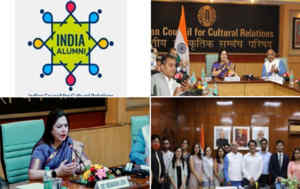 Indian Council for Cultural Relations has launched India Alumni Portal . The portal was launched in the presence of Minister of State for External Affairs Meenakshi Lekhi and President of Indian Council for Cultural Relations Dr. Vinay Sahasrabuddhe . Foreign students studying in India through India Alumni Portalwill be re-connected with and they will be linked with a variety of activities. The portal will also disseminate information directly to overseas students and, if required, link as local resource managers or local liaison officers. At present, about six thousand students are studying in India through scholarships given by the Indian Council for Cultural Relations. The largest number of these students came from Afghanistan, Bangladesh, Boswana, Ethiopia, Nepal and Sri Lanka. Under the council, in the last forty years, more than thirty thousand foreign students have been educated in India. 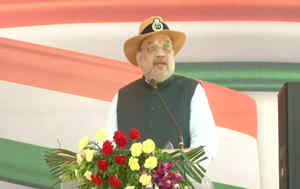 Union Home and Cooperation Minister Amit Shah inaugurated the Seema Darshan Project at Nadabet on the Indo-Pakistan border in Banaskantha district of Gujarat . Gujarat Chief Minister Bhupendra Patel , State Tourism Minister Puneesh Modi, Director General of Border Security Force and many other dignitaries were present on the occasion. The objective of starting the Seema Darshan Project is to provide an opportunity to the people to know about the life and work of Border Security Force personnel at the borders . All kinds of tourist facilities and other special attractions have been developed under Seema Darshan Project at a cost of one crore twenty five lakh rupees.

4.Central Railway launches ‘One Station One Product’ at one station each in five divisions including Mumbai Division 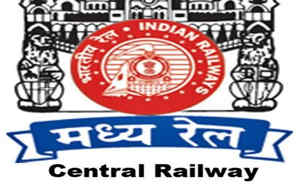 Central Railway under Ministry of Railways has launched ‘ One Station One Product ‘ at one station each in five divisions including Mumbai Division . Its objective is to make railway stations as centers of sales and promotion of local products to promote self-reliant India and Vocal for Local programme. As part of this program, a shop of Dharavi leather products was inaugurated at Chhatrapati Shivaji Maharaj Terminus Railway Station of Mumbai Division. In this, local products made of leather will be sold. Similarly, Kolhapuri Chappals at Kolhapur in Pune Division, local handicrafts of Burhanpur at Burhanpur Station in Bhusaval Division, Solapuri Chadars at Solapur and Bamboo Products at Nagpur Station have been started for exhibition and sale. 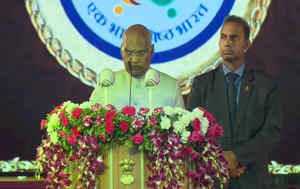 President Ram Nath Kovind inaugurated the annual Madhavpur fair at Madhavpur Gheed village in Gujarat . This four-day long historical and traditional fair is a symbol of Ek Bharat Shreshtha Bharat. This fair is being organized under the Amrit Mahotsav of Azadi. This fair is organized by the Union Ministry of Culture since the year 2018 . The Madhavpur Mela could not be held for the last two years due to Kovid restrictions. This year it has been organized on a large scale and hundreds of folk artists from the northeastern states are showcasing their art. According to folklore, the marriage of Shri Krishna and Rukmini ji took place in Madhavpur Gheda village . Historical Madhavarayaji Temple built in 15th centuryIts a symbol. The temple trust and village panchayat organize this fair every year to commemorate the marriage of Lord Krishna and Rukmini. 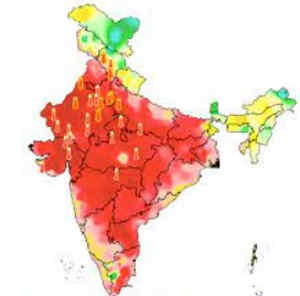 According to a new report titled ‘ Expanding Heat Resilience ‘, India’s cities and districts should step up their efforts to protect the vulnerable during the summer. The report has been released at a time when the country has recorded the hottest March since 1901 , according to the Indian Meteorological Department (IMD) . In March 2022, temperatures reached 40 °C over large parts of western and central India. According to this report, the cities of the country are in the grip of heat wave. Extreme temperatures are being recorded in Kerala and Himachal Pradesh. There is no history of heatwave in these states. This report was published by the Natural Resources Defense Council (NRDC)issued by. According to this report, the number of states affected by heat wave in 2019 was 28 while in 2018 it was 19. The NRDC report highlights the heat action plans implemented by some of the Indian states. A heat warning has been issued by Andhra Pradesh and the state government has also made people aware. Odisha has restricted the use of public transport services during peak summer times with an aim to protect commuters from heat stress. The report also details the success of Ahmedabad’s Summer Action Plan which was introduced in 2013 and is the first such initiative in South Asia to be developed. The initiative helped avoid 1,190 deaths each year due to the heat.

7.Nurse to Population Ratio in India 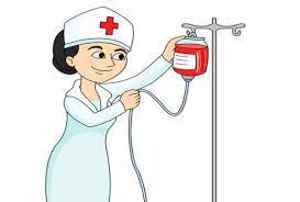 In India, the current ratio of nurses per 1000 population is 1.96:1000 . The Union Health Ministry gave this information in the Rajya Sabha. As per the records of Indian Nursing Council , there are about 33.41 lakh registered nursing personnel in India.Huh. This includes 23,40,501 registered midwives and nurses, 56,854 female health visitors and 10,00,805 nurse aides (9,43,951 auxiliary nurse midwives). As of November 2021, there are 13,01,319 allopathic doctors in the country who are registered with the National Medical Commission and State Medical Councils as of November 2021. The doctor-population ratio in the country is 1:834, assuming that there are 5,65,000 AYUSH doctors and 80% are registered allopathic doctors. In addition, in the country, there are 2,89,000 registered dentists and 13,00,000 healthcare and allied professionals. The number of undergraduate seats in India has increased to 89,875 from 51,348 before 2014. This is 75% more than the previous number. The number of postgraduate seats in the country has also increased by 93% to 60,202 at present from 31,185 before 2014. 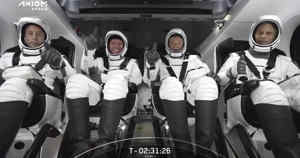 SpaceX has launched three wealthy businessmen to the International Space Station with its astronaut escorts on April 8, 2022 . They will remain in the space station for more than a week. NASA has joined Russia to host guests aboard the International Space Station (ISS) . This is SpaceX’s first private charter flight to the ISS two years after NASA took astronauts to the space station. Is. After years of protests from space visitors, NASA has finally agreed to allow visitors to the ISS. Russia has been hosting tourists to the ISS and before that to the Mir station for decades. Last year, a Russian film crew flew to the space station.

9.HD1: The farthest galaxy ever seen 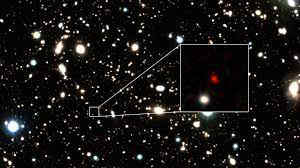 A galaxy named HD1 may be the most distant object astronomers have seen . The luminosity of this galaxy may be due to a massive black hole at its center or the formation of large primordial stars. Galaxy HD1 has been discovered by Fabio Pacucci with his colleagues at the Harvard-Smithsonian Center for Astrophysics , Massachusetts. He sifted through the vast amount of public data sets available from various powerful telescopes. He later observed HD1 again with the Atacama Large Millimeter/submillimeter Array (ALMA) based in Chile . These observations showed that the newly discovered galaxy is approximately 33.4 billion light-years away, and the most distant object previously discovered,GN-z11 lies one billion light-years ahead of the Milky Way. This newly discovered galaxy is exceptionally bright in terms of ultraviolet wavelengths. 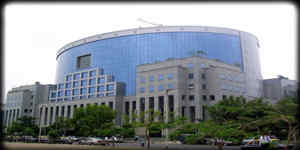 In order to support and strengthen the Fintech Ecosystem in GIFT IFSC , International Financial Services Centers Authority ( IFSCA) has established GVFL Limited at the office of IFSCCA located in Gujarat International Finance Tec-City (GIFT) City.(formerly Gujarat Venture Finance Limited) signed an MoU. The MoU focuses on cooperation in exchange of information between the two organizations and taking various steps for the advancement of FinTech in GIFT IFSC through seminars, webinars, conferences etc. The agreement also includes support, guidance, advice and other support from fintechs that accelerate the work of GIFT IFSC and the regulatory sandbox of IFSCCA entities. Most importantly, the MoU will also accelerate the growth and strengthening of the investment ecosystem in GIFT IFSC. 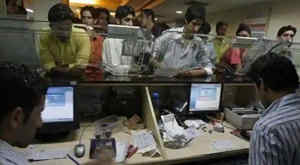 On April 7, 2022, Reserve Bank of India (RBI) imposed several restrictions on Bengaluru (Karnataka) based bank named Sushruti Soudha Sahakari Bank Nigamya , for a period of 6 months with effect from April 7, 2022, due to deterioration in the financial position of the lender. Put it on This decision has been taken by the apex bank after exercising its power conferred under sub-section (1) of section 35A read with the Banking Regulation (BR) Act, 1949, section 56 of the BR Act, 1949. 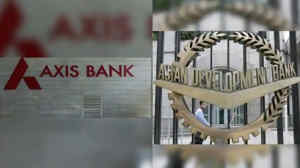 Axis Bank signed a Partial Guarantee Facility Agreement (PGFA) with the Asian Development Bank (ADB) for a partial guarantee program with an initial outlay of USD 150 million . This milestone project is ADB’s first supply chain finance transaction in India. To make it easier for small and medium-sized enterprises (SMEs) in India to participate in business through environmentally and socially sustainable supply chains. The deal will help Axis Bank increase its support of SMEs, freeing up capital which will increase the amount of support identified by Axis Bank as the most critical areas for sustainability. 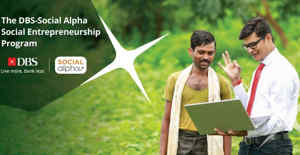 DBS (Development Bank of Singapore Limited) Bank India partnered with Social Alpha to address the global issue of food waste through sustainable solutions . Social Alpha is a not-for-profit Foundation for Innovation and Social Entrepreneurship (FISE) for tech start-ups headquartered in Bengaluru, Karnataka . Tectonic Innovation Towards Zero Food Waste (TZFW)It is a two-year program supported by DBS and powered by Social Alpha to identify innovative solutions by entrepreneurs in reducing quantitative and qualitative food loss and waste in food systems and agriculture. Under this, 5 high-impact, mission-driven start-ups will receive grant-in-aid to develop their product and marketing strategy, along with branding support, access to grassroots partnerships and pitch for seed capital. 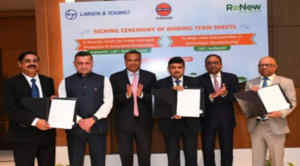 Indian Oil Corporation Limited (IOCL) , Larsen & Toubro (L&T) , and ReNew Power have formed a Green Hydrogen Joint Venture (JV)The company has signed a binding term sheet for the formation, development, execution and asset ownership of Green Hydrogen in India. IOCL and L&T will also form a joint venture for manufacturing of electrolysers. All three companies will have an equal stake in the proposed Green Hydrogen JV. Additionally, IOCL and L&T have signed a binding term sheet to form a joint venture with equity participation for manufacture and sale of electrolysers used in the production of green hydrogen. Under the self-reliant mission, both the joint ventures aim to enable India to transition from a gray hydrogen economy to a green economy.

15.Ram Navami celebrated across the country with reverence and gaiety 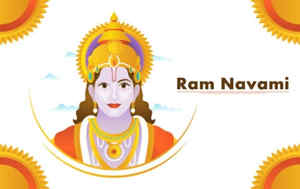 On 10 April 2022 , the festival of Ram Navami was celebrated with religious reverence and gaiety across the country. This festival is celebrated to commemorate the birth of Lord Rama , the seventh incarnation of Lord Vishnu . According to the Indian calendar, Ram Navami is celebrated on the ninth day of Shukla Paksha of Chaitra month . Nine days of Navratri fasts are observed before Ramnavami .