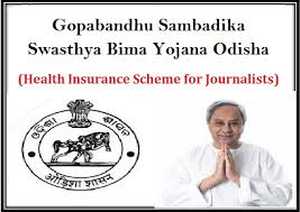 Orissa ‘s Chief Minister Naveen Patnaik (Naveen Patnaik) recently Odisha employs state COVID-19 frontline journalists warrior is declared. The announcement was made under the Gopabandhu Sambadika Health Insurance Scheme . With this, more than 6,500 journalists will benefit in the state. It is a health insurance scheme launched by the Odisha government for journalists. The scheme provides health insurance cover of Rs 2 lakh to all working journalists of the state. It was launched in 2018. The scheme includes cashless treatment in government and private hospitals. It also covers illnesses and injuries to journalists while performing their duties.

The Department of Telecommunications (DOT) , Government of India, allowed telecom service providers (TSPs) to test for the use and application of 5G technology . Applicant companies include Bharti Airtel Limited , Reliance Jio Infocomm Limited , Vodafone India Limited and MTNL . These companies (TSPs) have tie-ups with original equipment manufacturers and technology providers. Which includes Ericsson , Nokia , Samsung and C-Dot . Apart from this, Reliance Jio Infocomm Limited also has its own indigenous technologyWill test using. Telecom companies have now been given six months to conduct 5G trials . This includes two months of time required to install 5G equipment across the country.

Petroleum and Natural Gas and Steel Minister Shri Dharmendra Pradhan said Indian Oil Tikariklan Terminal, Delhi from Aioai plan under Usio (used cooking oil) based biodiesel blended diesel flagged off the first supply. Ministry of Petroleum and Natural Gas, along with the Ministry of Health and Family Welfare, Ministry of Science and Technology and Ministry of Earth Sciences, on 10 August, 2019, on World Biofuels Day, to create an ecosystem to convert UCO to biodiesel and develop entrepreneurship opportunities. On the occasion expressed his interest to purchase “biodiesel produced from used edible oil”.

Justice (retd) Prafulla Chandra Pant ( Prafulla Chandra Pant ), a member of the National Human Rights Commission (NHRC), was appointed the acting chairman of the commission from 25 April. Justice Pant, a former Supreme Court judge, was appointed as a member of the NHRC on April 22, 2019. The post of Speaker has been vacant since the completion of his term on 2 December 2020 by Justice HL Dattu, former Chief Justice of India. Earlier, he was appointed as the first Chief Justice of the newly established Meghalaya High Court in Shillong on 20 September 2013 and held the post till 12 August 2014.

The Badminton World Federation announced that India’s shuttler PV Sindhu and Michelle Li of Canada were asked to ‘ Believe in Sport ‘ by the International Olympic Committee (IOC) with a view to curbing competition manipulation. ‘Has been named as an athlete ambassador for the campaign. Sindhu and Lee will work to raise awareness and encourage on the subject of competition manipulation among athletes, as well as other athletes around the world. The pair is the global ambassador for BWF’s ‘I Am Badminton’ campaign from April 2020. The IOC’s ‘Believe in Sport’ campaign was launched in 2018 to raise awareness among athletes, coaches and officials of the danger of competition manipulation.

Shivrai Technologies , the leading digital banking platform, YONO SBI , to help smallholders, marginal and large holder farmers(Yono SBI), a free application. This would allow them to focus on their cost as well as the bookkeeping of the total profit continuously. The aim is to help farmers across the country manage their accounts efficiently, thereby cutting losses. Shivarai also has its own B2B brand, FarmERP. Through this new venture by SBI with YONO, they aim to make their application increasingly accessible. This free-of-cost application will not only efficiently manage their accounts, but will also provide them with a platform to analyze and calculate their profits, losses and expenses, thus enabling them to make wise purchasing, harvest and production decisions. Will do. It is curated in the simplest possible way for smallholder farmers to take advantage of it.

Reserve Bank of India (RBI) said securities to a category of second-class to the non-compliance of its instructions in case transferred to ICICI Bank on monetary penalty of Rs 3 crorehave put. This monetary penalty has been imposed on the bank for violation of the guidelines contained by the bank in its Master Circular on ‘Prudential Norms for Classification, Valuation and Investment Portfolios’. The penalty has been imposed in the exercise of the powers vested in the RBI under the provisions of the Banking Regulation Act, 1949 (Act). RBI said that an examination of correspondence in case of violation of instructions, inter alia, bringing securities from one category to another. This action is based on deficiencies in regulatory compliance and is not intended to provide for the validity of any transaction or agreement made by the bank with its customers.

Recently , the Lt. Governor of Jammu and Kashmir sacked a government employee for the first time using Article 311Has been done. Article 311 of the Constitution of India includes provisions relating to the dismissal, removal, or reduction of rank of Government servants working under the Union or a State, although this can be done only after due scrutiny. Although Article 311 confers a clear right of hearing to the employees against whom this Article has been applied, in the latest case Section 2 (c) of Article 311 has been invoked by the Lt. Governor, which is the condition of investigation and hearing Eliminates the imperative of if the President or the Governor is satisfied that such an investigation is not expedient in the interest of the security of the nation. In such a situation, that government employee is dismissed without any hearing.

Scientists have recently produced the lightest form of uranium . It is called Uranium-214 (Uranium-214) . This discovery reveals more information about an alpha particle. Alpha particles are particles that dissociate from radioactive elements as they decay. This isotope of uranium contains a greater number of neutrons than protons. Neutrons have mass. However, recently found uranium-214 is much lighter than other common uranium isotopes. It also contains uranium-235 . Uranium-235 is the most commonly used isotope. It contains 51 additional neutrons.

Mark Selby has become the world champion for the fourth time in snooker . He defeated Sean Murphy 18–15 in this competition held at the Crucible Theater. In this competition of five thousand pounds, Shelby did not let Murphy stand in front of him while performing brilliantly. In the world rankings, Shelby has now moved up to second place after the twin trump.

Recently the 14th edition of the Indian Premier League has been suspended . In the last few days, players and support staff members of several teams were found to be infected with Kovid-19, due to which the current version of the IPL has been postponed for the present. The Indian Premier League is one of the most popular sporting events in the world. The first season of IPL started in 2008. 8 teams take part in it. Mumbai Indians have won the most 5 cross IPL titles. The highest run in the IPL is named after Virat Kohli of 5878 Royal Challengers Bangalore. Lasith Malinga has taken the highest 170 wickets in the IPL. Teams participating in IPL are: Chennai Superkigs, Delhi Capitals, Kolkata Knight Riders, Mumbai Indians, Punjab Kings, Rajasthan Royals, Royal Challengers Bangalore, Sunrisers Hyderabad.

The country’s first drive in vaccination center was inaugurated by MP Rahul Shewale in Mumbai . The center is built in the parking lot of Kohinoor Square Tower in Dadar . With the establishment of this center, the PwD will be able to go to the vaccination center. This center provides transport facility to vaccinate people who do not have their own vehicle. This facility is available to all sections of the society.

Software company Microsoft and the Government of Nigeria will collaborate with each other to provide 27 thousand new jobs in the software sector in the next three years . Microsoft President Brad Smith has stated that the company will appoint one thousand seven hundred trained to train 5 million Nigerians. Necessary arrangements will be made for better internet facility in the six provinces of the country.

In the US , a large solar power project has been approved in the desert of California, which will provide electricity to 90 thousand homes. This $ 550 million Crimson Solar Power Project will be spread over two thousand acres of land. President Joe Biden has announced the deployment of renewable energy projects on public lands with the aim of combating climate change and generating employment.

In a major relief, the Center has decided to remove the I-GST on import of medical supplies including Remedesivir injection, API, medical oxygen, oxygen concentrator, cryogenic tank and Kovid vaccine . For their free distribution, this rebate has been given till 30 June. Earlier, the Center removed import duty and health cess on these medical supplies . This exemption will allow import of Kovid relief material for free distribution without any I-GST payment. State governments have been asked to appoint a nodal authority to provide this facility to importers.

The government has issued guidelines for ” production based incentive scheme ” for the food processing industry . Food and Processing Industries Minister Narendra Singh Tomar also launched an online portal for this scheme. The ministry has said that under the Prime Minister’s Self Reliant India campaign, the government has started this new scheme which will be implemented during 2021-22 to 2026-27. There will be an outlay of ten thousand 900 crores on this. It aims to help popularize Indian brands of food products in the international market with India’s natural resources.

Facebook has launched a vaccine finder tool on its mobile app in Indiahas partnered with the Government of India to introduce (vaccine finder tool), which will help people identify nearby locations for hinges. Earlier this week, the social media giant announced a grant of US $ 10 million for emergency response efforts for COVID-19 status in the country. Partnering with the Indian government, Facebook will begin making its Vaccine Finder tool available in 17 languages ​​on the Facebook mobile app in India to help people identify nearby locations to get the vaccine. In this instrument, vaccine center locations and their hours of operation have been provided by the Ministry of Health and Family Welfare (MoHFW). The cumulative number of COVID-19 vaccine doses administered in the country has crossed 15.22 crores, plus 2 in Phase-3 of COVID-19 vaccination starting May 1 for people above the age of 18 years.

UK- based global brokerage firm Barclays has lowered India’s GDP growth estimate to 10 per cent from its earlier estimate of 11 per cent for 2021-22 (FY22) . In addition, Barclays forecasts a 7.6 percent contraction of the economy in FY21.

Coal Miners’ Day is celebrated on 4 May to appreciate the hard work of some of the greatest unheard heroes of the Industrial Revolution. The day is celebrated to show appreciation for coal miners and to honor their achievements. Coal miners spend most of the day digging, tunneling and extracting coal from the mines. They dig deep into the earth to bring out the wealth that helps sustain our lives. Coal mining is one of the most difficult occupations. In India, coal mining began in 1774, when John Summer and Suetonius Grant Heatly of the East India Company began commercial exploration at the Raniganj coalfield along the western side of the Damodar River. The demand for coal increased after the introduction of steam locomotives by railways in 1853.