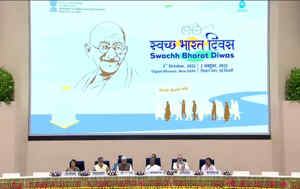 President Draupadi Murmu presented the Swachh Survekshan Grameen 2022 and Jal Jeevan Mission Performance Evaluation Awards at a function in New Delhi . In the category of large states, first prize for Swachh Survekshan Grameen was given to Telangana , second to Haryana and third to Tamil Nadu. Andaman and Nicobar bagged the first prize among smaller states and union territories . Dadra and Nagar Haveli and Daman and Diu bagged the second position, while Sikkim bagged the third position. Swachh Survekshan Grameen 2022The objective of the scheme is to rank the states and districts for their performance on the basis of the quality parameters prescribed under the Swachh Bharat Mission Gramin. The Performance Appraisal Awards are given after assessing the performance in the area of ​​water utilization at the local level in the States and Union Territories. Under the Jal Jeevan Mission, the water supply situation in the households is assessed every year. Puducherry got the first prize in this category . Goa finished second and Tamil Nadu third. 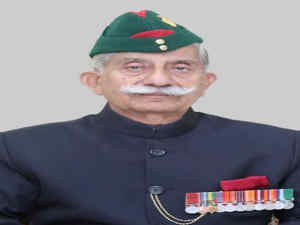 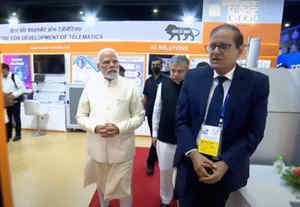 To encourage young writers , the second phase of Yuva Pradhan Mantri Yojana was launched. This scheme has been launched to promote reading, writing and book culture in the country. In the first phase, a large number of young writers from 22 Indian languages ​​and English participated in it. In view of this, the second phase of the scheme has been started. The Ministry of Education has said that this scheme is in line with the vision of the Prime Minister to understand and promote India’s democracy. In this, such writers will be produced who will promote India’s rich heritage, culture and knowledge system through their writings. The Ministry informed that 75 authors through All India Competition on www.mygov.in portalwill be selected. The competition will start from 2nd October till 30th November. The winners will be announced on February 28 next year. From March 1 to August 31 next year, renowned authors and mentors will train young writers. 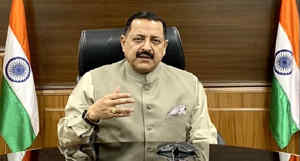 Union Minister Dr Jitendra Singh launched the second phase of the special cleanliness drive in New Delhi . The campaign focuses on cleanliness including disposal of junk and reducing pendency in the government. He said that this campaign, started on the occasion of Gandhi Jayanti, will continue till October 31. It aims at timely and effective disposal of public grievances and old cases. Dr Singh said that cleanliness drive would be carried out at 67 thousand places identified by the ministries and departments. Under the month-long campaign, a cleanliness drive will be conducted at Mission Mode in more than 1.5 lakh post offices, railway stations and other government offices.

6. World’s largest safari park to be built in Gurugram 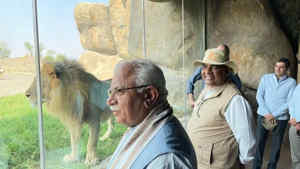 The world’s largest safari park will be set up in an area of ​​about 10,000 acres falling in the Aravalli mountain range of Gurugram and Nuh districts of Haryana . Currently the largest curated safari park outside Africa is in Sharjah. The area of ​​this park opened in February 2022 is about two thousand acres. Natural jungle parks in Africa are quite large. The proposed Aravalli Park size will be five times this. Explain that the Central Zoo Authority has done an evaluation study of the area for this and has agreed to the technical feasibility of setting up such a park. 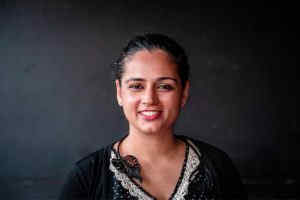 India’s women’s rights activist Srishti Bakshi has been awarded the Changemaker Award for her advocacy for combating gender-based violence and advocating for safe access to public places . It is one of the Sustainable Development Goals (SDG) awards of the United Nations . Bakshi walked 3,800 km from Kanyakumari to Kashmir, passing through 12 states. During this, she not only created awareness about the causes of violence against women but also organized over a hundred workshops on digital and financial literacy to empower women. Her walking journey has also been followed by a documentary film titled ‘VOMB: Women of My Billion’, which highlights the realities of Indian women today. This documentary film was launched in 2021.

8. Kazakhstan changed the name of the capital from Nur-Sultan back to Astana 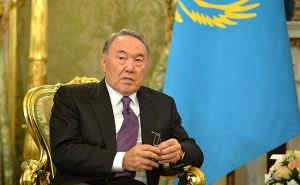 Kazakhstan has renamed its country’s capital Nur Sultan . Nur Sultan will now be known as Astana . Actually, earlier Nur Sultan was known only as Astana. In such a situation, there was a demand for a long time to change the name of the capital of the country. Now the President of Kazakhstan has signed constitutional amendments to rename the capital and extend its term to seven years. 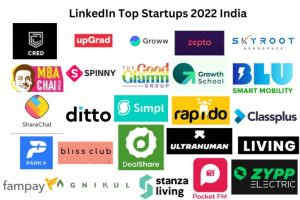 LinkedIn has recently released the list of top 25 startups in India . These companies have shown combative ability in an uncertain market environment and have consistently driven innovation this year. Unified Payments Interface (UPI) ‘Cred’ tops this year’s list . This young $6.4 billion start-up has topped LinkedIn’s top startups list. It is number one on the list. Last year it was in third place. 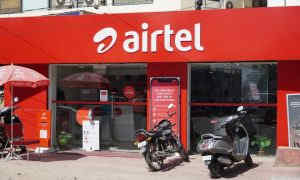 Airtel Payments Bank has started installing 1.5 lakh micro ATMs in tier II cities and semi-urban areas to facilitate cash withdrawal to its customers . This information was given by the company. Micro ATMs will be introduced in a phased manner. The bank will gradually expand its service to cover more banking sectors in a phased manner. 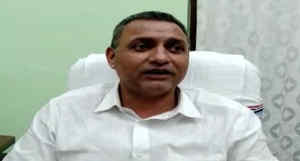 Bihar Agriculture Minister Sudhakar Singh has resigned from his post. He submitted his resignation letter to Deputy Chief Minister Tejashwi Yadav . Sudhakar Singh is the second minister after Law Minister Kartikeya Singh to resign from the Nitish cabinet. Sudhakar Singh, the first-time Rashtriya Janata Dal MLA from Ramgarh in Kaimur district, had recently come into the limelight for raising the issue of rampant corruption in the agriculture department. Shri Singh said that the figures of the government are an indication of the failure of the Agriculture Action Plan in achieving its objectives. 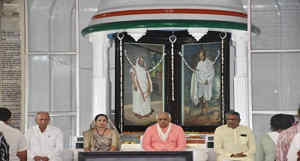 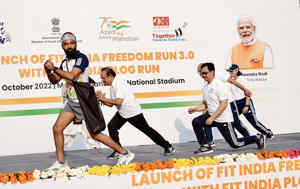 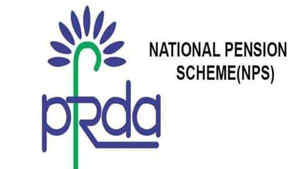 Pension regulator Pension Fund Regulatory and Development Authority (PFRDA) celebrated National Pension System (NPS) Day on 1 October . NPS also launched a campaign under ‘ Azadi Ka Amrit Mahotsav ‘ to promote pension and retirement planning . NPS subscribers will enjoy the power of benefits, compounding and will get a slew of benefits post retirement. PFRDA will organize campaigns with an aim to encourage every citizen to make a plan to build a financial cushion to ensure a financially sound future post retirement. The campaign also tries to create awareness about the pension scheme among the public. It aims to cover all eligible citizens under the pension scheme to fulfill the vision of the pensioner society for India. 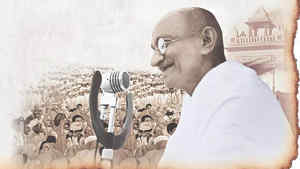 The country is celebrating the 153rd birth anniversary of Mohandas Karamchand Gandhi i.e. Mahatma Gandhi . The birth anniversary of Mahatma Gandhi is celebrated every year on 2 October as Gandhi Jayanti. The day was established by the United Nations General Assembly in 2007 . The day is celebrated to spread the message of non-violence through public awareness and education. Mahatma Gandhi led the independence movement along with many national leaders against the British rule in India. An all-religion prayer meeting was organized at Raj Ghat , the tomb of Mahatma Gandhi in Delhi . President Draupadi Murmu, Vice President Jagdeep Dhankhar and Prime Minister Narendra Modi paid floral tributes at Gandhi’s Samadhi. Mahatma Gandhi was born on October 2, 1869.was born in Porbandar in the Bombay Presidency of British India . He was assassinated by Nathuram Godse on January 30, 1948. 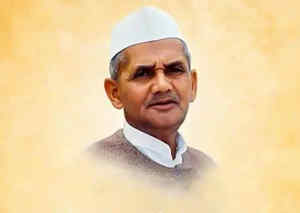 Shri Lal Bahadur Shastri Jayanti was celebrated on 2nd October . Shri Lal Bahadur Shastri was born on 2 October 1904 in Mughalsarai , a small railway town seven miles from Varanasi in Uttar Pradesh .Happened in. His father was a school teacher. In 1930, Mahatma Gandhi broke the salt law and traveled to Dandi. This symbolic message brought a kind of revolution in the whole country. Lal Bahadur Shastri joined this struggle for freedom with great energy. He led several rebel campaigns and spent a total of seven years in British prisons. This struggle for independence made him fully mature. Shastriji was made the Prime Minister of the country in 1964 due to his clean image after Jawaharlal Nehru died on May 27, 1964, during his tenure as Prime Minister. He assumed the office of the Prime Minister of India on 9 June 1964. During the 22-day war with Pakistan, Lal Bahadur Shastri raised the slogan “Jai Jawan, Jai Kisan”, Stressed on the need to boost India’s food production. Under his leadership, India defeated Pakistan in the 1965 war. He died under mysterious circumstances on the night of 11 January 1966 after signing an agreement to end the war with the Prime Minister of Pakistan Ayub Khan in Tashkent. He was posthumously awarded the Bharat Ratna for his simplicity, patriotism and honesty. 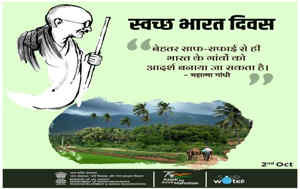 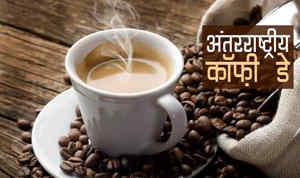 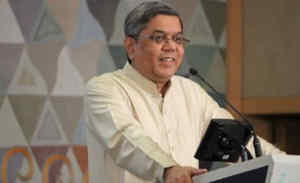 The Prime Minister , Shri Narendra Modi , has expressed deep grief over the passing away of Shri Tulsi Tanti , a veteran businessman and founder of Suzlon Energy . Tulsi Tanti, the founder of Suzlon Energy, popularly known as the ‘ Wind Man ‘ of India, passed away at the age of 64 due to cardiac arrest. Born in Rajkot, Gujarat in 1958, Tanti was one of the promoters of Suzlon Energy, which he founded in 1995. At present, the market cap of Suzlon Energy is Rs 8,535.90 crore. Under his guidance, Suzlan Energy established its presence in European markets apart from India. The company also has R&D centers in Germany, the Netherlands, and Denmark.

21. 174 killed in stampede during football match in Indonesia 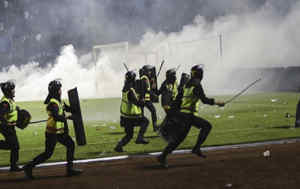 174 people were killed and 180 were injured in a stampede during a football match in Indonesia . A stampede broke out after chaos and violence in the Indonesian Football League match. Police Chief Nico AFINTA said supporters of the team that lost the match entered the field. The police had to use tear gas to control them, after which a stampede started. It has been told that about 4 thousand spectators had entered the stadium more than its 38 thousand capacity