11. Vice President appeals to the citizens of the country to adopt Khadi as ‘National Textile’

Now, PayU India and BillDesk will be able to meet the changing payment needs of digital consumers, merchants and government enterprises in India. 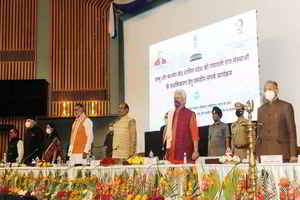 Lok Sabha Speaker Om Birla inaugurated a parliamentary outreach program to empower Panchayati Raj Institutions (PRIs) in Jammu and Kashmir . Sher-e-Kashmir International Convention Center in SrinagarThe program was inaugurated in Now, arrangements will be made by the Lok Sabha Secretariat to organize capacity building programs for the representatives of Panchayati Raj Institutions in Jammu and Kashmir. Empowered Panchayats under this program will help strengthen democracy and increase people’s confidence. Parliamentary Outreach Program for Empowerment of Panchayati Raj Institutions is a unique initiative of Lok Sabha Speaker Om Birla. It is the first program of its kind that seeks to strengthen governance at the grassroots level.