We are sharing some of the memory based questions asked in IBPS RRB Mains 2017 Exam :-

Q1. There is a small-sized type of volatile computer memory that provides high-speed data access to a processor and stores frequently used computer programs, applications and data. Which among the following is a type of memory used to hold frequently used data?

Q2. _____ memory in a computer is where information is temporarily stored while it is being accessed or worked on by the processor.

Q3.  Which among the following is a small set of data holding place that is a part of the computer processor and may hold an instruction, a storage address, or any kind of data?

Q4. An optical input device that interprets pencil marks on paper media is________.

Q5. Which among the following is related to the internet and e-mail?

Q6. Shift, Control, Alt are examples of which among the following category?

Q7. In a keyboard, left-right-up-down set of keys facilitates which among the following function?

(a) Deleting Data or Modification

(b) Page Scrolling to view a Document

Q8. Which among the following term means/refers to web address of a page?

Q9. Which of the following is always a part of an E-mail address?

Q10.  Which among the following is a term for the initial or main web page of a website or a browser?

Q12. Help menu is available at which button?

Q13. Which among the following is area of an email that is a short description of the message?

Q14. Which among the following is the smallest unit in an image in a computer screen?

Q15. Different icons of application software can be found in which bar in latest version of Microsoft Windows?

Q16. Information that comes from external source and fed into computer software is called _______.

Q17. An email attachment is referred to as?

(a) The body of the email

(b) The address of the sender

(c) A document that is sent with an email

(d )The address of the receiver

Q19. Which unit is a combinational digital electronic circuit that performs arithmetic and bitwise operations on integer binary numbers ?

Q20. Which button is called as middle button used as third mouse button by pressing on it.

Q21. Presentation of a series of still images on a projection screen or electronic display device is called as:

Q22. Which memory is used as temporary memory?

Q24. Which unit of computer helps in communication between the memory and the arithmetic logical unit.

Q25. Specialized program that allows user to utilize in specific application is classified as

Q26.Which of the following is most commonly used to identify return visitors to a website?

Q27. ________ is a type of electronic spam where unsolicited messages are sent by email.

Q30. A device that not only provides surge protection, but also furnishes the computer with battery backup power during a power outage is ______.

Q32. Which of the following is not a valid memory unit?

Q33. Which of the following is a machine independent program?

(e) None of these

Q34. Which one of the following is not an e-mail service provider?

Q35. Which of the following fields of an e-mail hides the identity of the recipients?

(a) View or Print Data

Q37. Which among the following functions does Ctrl+P perform?

(a) Move the cursor one word to the right

(b) Move the cursor to the end of the line

(c) Move to cursor to the end of the document

(d) Move the cursor one paragraph down

(e) None of these

Q40. ________ is a useful tool which allows you to create a huge number of documents by merging the main document with the data source.

Some more Questions On Computer asked in Exam  :-

41-Which of the following can only have Sequential Access?- Magenatic Tapes

42- Which of the following uses the handheld operating system? PDA

47- Who among the following is the odd one- Keyboard

50- The horizontal and vertical lines on a worksheet are called— .Gridlines

53- A _________ translates a program written in a high-level language into Machine language. Compiler

54- The copy command saves to: Clipboard

55- Which of the following is an example of Single User Operating System? MS DOS

57- Which is not a storage device? Moniter

59- That provides emergency power to a load when the input power source or mains power fails? UPS

61- In e-mail inbox, where junk files are send? Spam

62- Which part of system is used for arithmetic? ALU (Arithmetic and Logical Unit)

63- What is used to show slides in Powerpoint? Slide Show

65- What is unique in computer? IP Address

Directions (1 – 5): Answer the questions on the basis of the information given below.  (5 questions)
A number arrangement machine when given an input of words/numbers, rearranges them following a particular rule in each step. The following is an illustration of input and steps of rearrangement.

This is the final arrangement and step 6 is the last step for this input.

7.If ‘B’ walks 4 km east from point Y, then he is in which direction with respect to point D?
A) South
B) North-west
C) North-east
D) North
E) South-west

Directions (9-10): In each of the following questions, a question is followed by two statements. Read all the statements and find that which statements are required to answer the question and answer accordingly. (5 questions)

For Complete Solution and Detail

No. 1 Coaching Institute of Udaipur 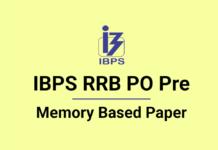