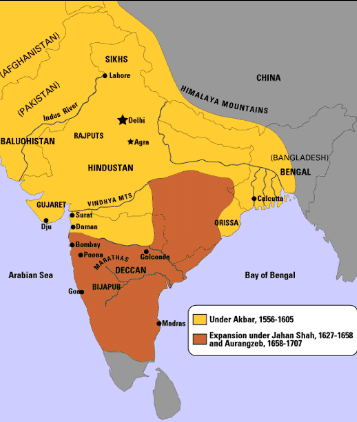 Rulers during The Mughal Empire

Babur was the founder of Mughal dynasty. He was a descendant of Timur from his father’s side and Genghis Khan from his mother’s side. He defeated Ibrahim Lodi in the First Battle of Panipat (1526) and established the Mughal power in India. In 1527, he defeated Rana Sanga of Mewar in the Battle of Khanwa near Agra and in 1529, he defeated Afghans for the second time in the Battle of Ghagra.

After the death of Babur, his son Humayun ascended the throne. His first confrontation was with Sher Khan (later known as Sher Shah) at Chunat in 1532. Sher Shah defeated him in the Battle of Chausa (1539)  as well as in the Battle of Kanauj (1540). After that, he fled from India.
After Sher Shah’s death, he invaded and defeated the brothers of Sher Shah and once again became the ruler of India.

Humayunama, his biography, was written by his sister, Gulbadan Begum.

You should know more about Akbar as he is historically and politically more relevant than other rulers in the Mughal dynasty. The eldest son of Humayun, Akbar ascended the throne at the age of 14. His regent Bairam Khan conquered strategic cities and subjugated Malwa and Rajasthan.

Second Battle of Panipat (1556) was fought between Hemu, who was the general of Mohammad Adil Shah and Bairam Khan (mentor of Akbar). Hemu was defeated in this battle. The second battle of Panipat marked the real beginning of the Mughal Empire.

Conquest of Rajput state: Almost all of the Rajput states except the Ranas of Mewar recognized the supremacy of Akbar.

In 1576, Rana Pratap and the Mughal Army led by Man Singh fought the Battle of Haldighati where Akbar’s army defeated Rana Pratap.

After the death of Akbar, his son Salim (Jahangir) took the throne. He was famous for his paintings. Furthermore, he also wrote Tuzuk-i-Jahangiri in Persian.

For the purpose of justice, he established Zangir-i-Adal. He sentenced 5th Sikh Guru Arjun Singh to death. In his last days, his son Shahjahan revolted against him.

Shah Jahan ascended the throne after the death of Jahangir. Those in neighbouring kingdoms knew him best for his foreign policies. Bijapur and Golkonda recognized the Mughal suzerainty during his time.

In addition to politics, he was also known for his love for art, culture, and architecture. Tajmahal is one of the UNESCO recognized world heritage sites which was built during his time. Also Jama Masjid, Red fort were some of the magnificent structures built by his commission.

In 1658, his son, Aurangzeb imprisoned him. After 8 years of imprisonment, he died in 1666 during his captivity.

After capturing his own father and murdering his own three brothers, Aurangzeb took the throne. He also executed the 9th Sikh Guru – Guru Teg Bahadur when he refused to convert to Islam. He annexed Bijapur and Golkonda.

While he reigned, several rebellions took place. Maratha rebellion under the leadership of Shivaji was one of them.

After the death of Aurangzeb in 1707, the Mughal empire rapidly declined due to weak successors, wars of succession, Jagirdari crisis, foreign invasion and finally British conquest of India.