In this flurry of diplomatic activity, it would be natural to ask why India has been so soft-footed and silent in comparison. As the subcontinent’s biggest nation, neighbour to both Bangladesh and Myanmar, as well as the country most likely to be affected if the numbers of Rohingya refugees continue to grow, India in fact should be showing the most initiative in this crisis. Instead, through a series of blunders that began with Prime Minister Narendra Modi’s own visit to Myanmar, India has allowed its voice to be muffled. Even as hundreds of thousands were fleeing violence at home, Mr. Modi refused to refer to the Rohingya in his press statements in Naypyidaw in early September. Nor did India refer to anything other than the terror strike by the Arakan Rohingya Salvation Army while discussing the violence in Rakhine. It wasn’t until two days later, and after some prodding from Ms. Hasina, that the Indian foreign office even issued a statement of concern over the refugee crisis that had reached alarming proportions, something the U.S. has now called a clear case of “ethnic cleansing”. Moreover, in Bali, India refused to endorse a 50-nation parliamentarian conference’s declaration because it referenced the Rohingya. Every other South Asian country, including Buddhist-majority Bhutan and Sri Lanka, endorsed the Bali declaration. Later in September, the government began to dispatch humanitarian aid in an operation rather grandly named “Operation Insaniyat (Humanity)”, but was only one of several countries including the U.S., Turkey, Azerbaijan, Malaysia and others to do so. The government’s consignment to Myanmar of a mere 3,000 “family bags” last week also slipped notice given the large numbers of those displaced inside Rakhine and in desperate need of assistance. The Indian effort, coupled with Foreign Minister Sushma Swaraj’s visit to Bangladesh, where she didn’t even spare time for a trip to the camps, stands out not just in stark contrast to other nations, but to India’s own record. In every way, the Rohingya crisis is mammoth, with around a million men, women and children in Bangladesh and Myanmar living perilously. India, which has a tradition of rushing humanitarian aid and medical assistance, doctors and volunteers to other nations — for example, after the 2004 tsunami, the 2008 Cyclone Nargis that hit Myanmar, and the 2015 Nepal earthquake — has been seen to visibly hold back during the Rohingya crisis.

Meaning: The restoration of friendly relations.

Example: His reconciliation with your uncle.

Meaning: Run away from a place or situation of danger.

Example: To escape the fighting, his family fled from their village.

Example: The most gruesome murder.

Meaning: The return of someone to their own country.

Example: The voluntary repatriation of refugees.

Meaning: A number of things arriving or happening suddenly and during the same period.

Example: A flurry of editorials hostile to the government.

Meaning: A serious mistake, usually caused by not taking care or thinking.

Example: He said that the tax was a major political blunder.

Example: His voice was muffled.

Meaning: Stimulate or persuade (someone who is reluctant or slow) to do something.

Example: They attempted to prod the central bank into cutting interest rates.

Example: The report was endorsed by the college.

Meaning: Deal with (a task or opponent) quickly and efficiently.

Example: The Welsh team were dispatched comfortably by the opposition.

Meaning: In a proud, impressive, or ambitious manner.

Example: The purchase of the painting was grandly announced.

Meaning: A batch of goods destined for or delivered to someone.

Example: A consignment of drugs.

Meaning: Feeling or showing a hopeless sense that a situation is so bad as to be impossible to deal with.

Example: He was one of those men who stood out in a crowd.

Meaning: In a way that is full of danger or risk. 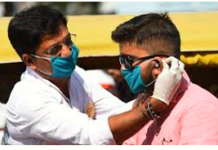 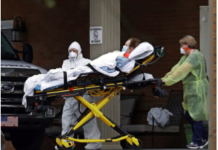 Editorialthe/Hindu Anushka_Academy - April 6, 2020
0
Topic Of The Day:-"Lacking guarantees" In addition, to those who may just consider, as Libya did, to relinquish nuclear... 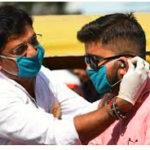 Maharashtra govt to provide online training to about 1.25 lakh AYUSH...