TOPIC – Protect, don’t panderThe ‘heckler’s veto’ seems to be winning repeatedly against standup comedian Munawar Faruqui. Bengaluru has joined the list of cities in which Mr. Faruqui cannot perform because rightwing Hindutva groups routinely threaten to disrupt his shows, wherever they are scheduled to be held. The Bengaluru city police asked the organizers to put off a show on November 28, alleging that allowing it to go on would create law and order problems and disrupt peace and harmony. Mr. Faruqui was unjustly arrested in Indore in January after a BJP functionary’s son complained that he was about to denigrate Hindu gods in a planned show. He had to spend 37 days in prison before obtaining bail from the Supreme Court for remarks that had not been made in a show that did not take place. It is this case, in which the police arrested even local organizers and those selling tickets for the show and had nothing to do with the content of his performance, that has been cited by the Bengaluru police while voicing fears about the consequences of allowing the show to be held. Earlier, programmers in which he was due to perform in Raipur, Mumbai, Surat, Ahmadabad and Vadodara were called off for the same reason. It is a telling commentary on the state of free speech in the country that anyone can be silenced anywhere by the threats posed by violent and vociferous groups that no regime in the country seems to be able to rein in. In a despairing reaction, Mr. Faruqui has said, “Goodbye! I’m done”, indicating that he has no further hope that he would be allowed to exercise his constitutional right to express himself. This is reminiscent of Tamil writer Perumal Murugan declaring his own “death” in a literary sense after being silenced by conservative and religious groups. In Mr. Murugan’s case, he was fortunate that the Madras High Court resurrected the author in him with a stirring verdict underscoring the duty of the state to protect free speech and to preserve law and order, instead of placating those who threaten to take the law into their own hands. It is a pity that the police authorities perfunctorily advise authors, speakers and artists to remain silent rather than take proactive steps to protect their fundamental rights. It is true that whenever such issues go before a court of law, the resulting judgments are speech protective, but the proclivity of the authorities to pander to chauvinist groups is posing a serious threat to free expression in society. The Supreme Court’s observation in S. Rangarajan etc. vs. P. Jagjivan Ram (1989) that suppressing free speech in response to a threat of demonstration or protest “would be tantamount to negation of the rule of law and surrender to blackmail and intimidation” seems to have few takers among those in positions of power.

The Hindu Editorial Words with meanings, synonyms, and antonyms P

Disrupt (verb) – To cause disarray or disorganization in the order of

Reminiscent (adjective) – Tending to remind one of something

Perfunctorily (adjective) – Carried out without real interest, feeling, or concern

Proactive (adjective) – Suggestive of having knowledge of future events 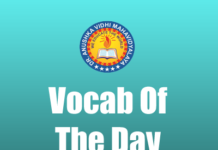