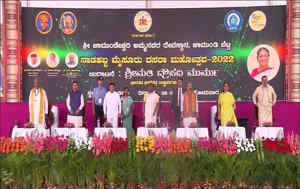 President Draupadi Murmu inaugurated the Dussehra festival in Mysuru , Karnataka . He worshiped Goddess Chamundeshwari in Chamundi Hills and sought her blessings for the welfare of the countrymen. The President began his speech in Kannada and greeted the people. Mrs. Murmu later while addressing in Hindi said that Vijayadashami is the festival of victory of Goddess Chamundeshwari over Mahishasura. He said that this festival also symbolizes the power of women. Mrs Murmu recalled the role of Queen Abbakka Devi and Queen Chennama in the struggle with the colonial powers, and Onke Obavva of Chitradurga in countering Hyder Ali’s troops. 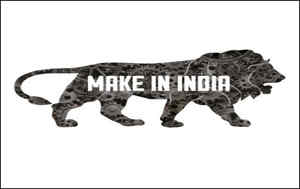 Government’s flagship program ‘ Make in India ‘ is completing eight years . Prime Minister Narendra Modi launched this program on 25 September 2014 . It aims to promote investment, innovation and skill development, and create best-in-class manufacturing infrastructure. The Make in India program is making significant achievements in 27 different sectors of the country. The government is focusing on sectors like semiconductors to realize Prime Minister Narendra Modi’s goal of self-reliant India. 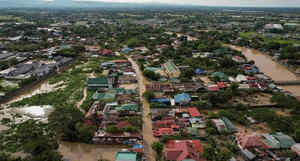 Thousands of people have been evacuated and government offices have been closed as Hurricane Noru struck the northern islands of the Philippines . During the storm, the main island of Luzon had wind speeds of two hundred and forty kilometers per hour. More than five and a half million people live in this island, which is almost half of the country’s population. Due to the intensity of the storm, there is a possibility of landslides, flash floods and severe disaster. 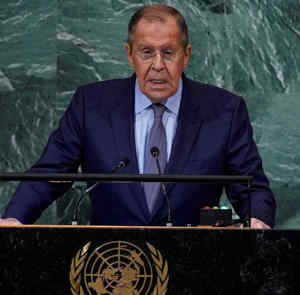 Russian Foreign Minister Sergei Lavrov has supported India to become a permanent member of the United Nations Security Council . Speaking at the 77th UN General Assembly, Mr. Lavrov said the Security Council would become more democratic if Africa, Asia and Latin American countries were included. He said that major countries like India and Brazil should be given permanent membership in the council.

5. A three-party MoU was signed to promote Ice Hockey in Ladakh 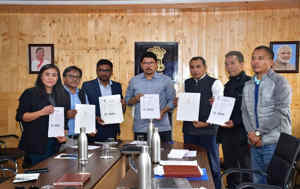 A three-party MoU has been signed between the Sports Department of the Union Territory , Leh Hill Council and Eicher Group Foundation for promotion of ice hockey in Ladakh . The ice hockey season is about to begin in Ladakh. Virtually participating in the MoU signing program, Ladakh Lieutenant Governor R.K. Mathur has appealed to the Eicher Group Foundation to provide technical advice and assistance in developing the infrastructure for ice hockey in Ladakh. 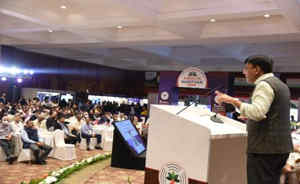 The Union Minister of Health and Family Welfare, Dr. Mansukh Mandaviya inaugurated the two-day Arogya Manthan 2022 programme. Arogya Manthan marks the completion of 4 years of Ayushman Bharat Pradhan Mantri Jan Arogya Yojana (AB PM-JAY) and 1 year of Ayushman Bharat Digital Mission (ABDM). Dr. Mansukh Mandaviya highlighted the PM-JAY beneficiaries as the most important stakeholders in the largest global public health insurance scheme and said that over 19 crore Ayushman cards have been made in 33 states/UTs in the country, and 24 More than crore ABHA numbers have been created. This marks a significant achievement in the digitization of health records in the country. He also informed that the present rate of making 4.5 lakh cards per day would be increased to 10 lakh Ayushman cards per day. 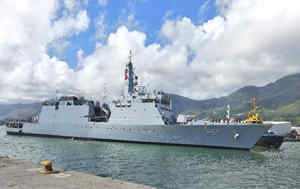 INS Sunayna arrived at Port Victoria in Seychelles on Saturday to participate in the joint annual training exercise ‘Operation Southern Readiness’ . Indian Navy is participating in this joint exercise for the first time. Apart from India , USA, Italy, Australia, Canada, New Zealand, UK and Spain are participating in it. 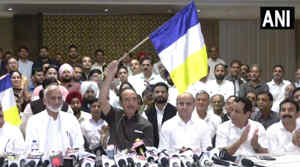 Former senior Congress leader and former Jammu and Kashmir Chief Minister Ghulam Nabi Azad has announced the name of his new party. The name of the party has been named ‘ Democratic Azad Party ‘. Announcing this at a press conference in Jammu, Mr Azad said that the ideology of the party would be like his name and people of all religions would be able to participate in it. He added that the party’s agenda includes restoration of full statehood to Jammu and Kashmir, continuing the struggle to reserve land and jobs rights for the local people. 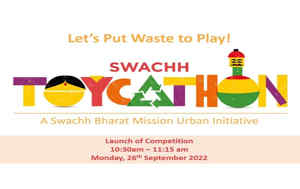 10. Fridays for Future launches protests against climate change in Germany and other countries 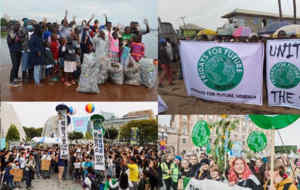 Fridays for the Future activists campaign on climate change in Germany and other countriesDemonstrations have been started against About 280,000 people are taking part in demonstrations in more than 270 cities and towns across Germany as part of the Fridays for Future movement. One of the largest rallies took place in Berlin, where more than 36,000 people gathered. The protesters are calling for a halt to global warming and calling on the German government to set up a 100 billion euro fund to expand the use of renewable energy. They are also calling for the cancellation of financial and climate debts of developing countries. These protests were organized 6 weeks before the start of the United Nations Climate Summit (COP27), which is scheduled to take place in Sharm el-Sheikh, Egypt. Similar protests have taken place in countries such as Italy, South Korea, the US and the Democratic Republic of the Congo.

11. The winners of the Breakthrough Prize 2023 have been announced 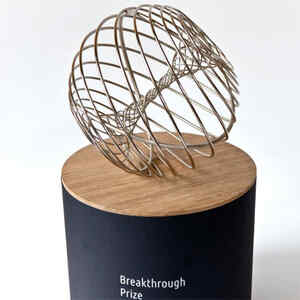 Recently the Breakthrough Prize 2023 was awarded to those individuals who made a significant contribution to scientific development . The Breakthrough Prizes are international awards given under three categories – Mathematics, Fundamental Physics and Life Sciences . These awards recognize scientific progress in these areas. The award was formed in 2010 by a group of Silicon Valley entrepreneurs – Milner (venture capitalist), Mark Zuckerberg and his wife Priscilla Chan, and Google’s Sergey Brin . The winners of this award receive USD 3 million each in prize money, which is more than USD 1 million received by Nobel laureates. 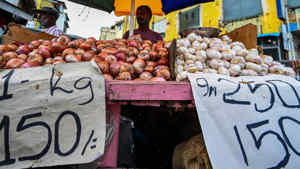 Sri Lanka recorded an inflation rate of 70.2% for August 2022 . Sri Lanka’s inflation rose to 70.2% in August. The country recorded 66.7% in July. The National Consumer Price Index (NCPI) rose 2.5% in August, as food prices rose by 1.7% and non-food products by 3.2%. Non-food inflation rose to 57.1% in August from 52.4% in July. The main reason for this is the increase in electricity rates. Basic prices have risen from 57.3 per cent in July to 60.5 per cent in August without including volatile commodities such as food, energy and transportation. Food prices have increased by 84.6 per cent, up from 82.5 per cent in July. 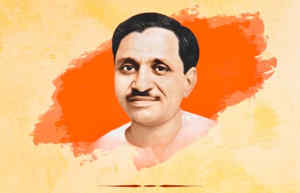 Every year 25 September is celebrated as Antyodaya Diwas in India to mark the birth anniversary of Pandit Deendayal Upadhyaya . Antyodaya means ” uplift of the poorest of the poor ” or ” uplift of the last man “.is ” (uplifting the poorest of the poor” or “rise of the last person)”. The day was declared by the Government of India on September 25, 2014 and is being officially celebrated since the year 2015. Pandit Deendayal Upadhyay was born on 25 September 1916 in Nagla Chandrabhan village of Mathura district. The philosophy presented by him is called ‘Integral Humanism’ whose aim was to present an ‘indigenous socio-economic model’ in which human beings are at the center of development. Pandit Deendayal Upadhyay opposed both Western ‘capitalist individualism’ and ‘Marxist socialism’, but welcomed modern technology and Western science. 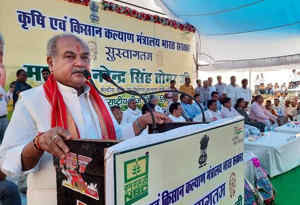 The Union Minister for Agriculture and Farmers Welfare, Shri Narendra Singh Tomar , laid the foundation stone of an organic seed farm of National Seed Corporation (NSC) at Morena . On its launch, new organic seeds of oilseeds will be available to the farmers of Madhya Pradesh . With this farm, farmers will be aware of modern methods, they will get high yielding seeds, their socio-economic status will improve. On this occasion, Shri Tomar announced that the Ministry of Environment, Forest, Climate Change has set up 207 hectares of National Chambal Wildlife Sanctuary . A big decision has been taken to recommend land de-notification . Due to this sanctuary area being a revenue land, the availability of sand will be at the local level, which will also increase employment. 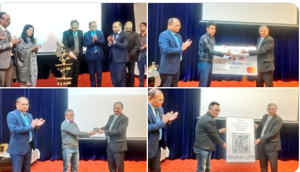 The Reserve Bank of India (RBI) has felicitated the bankers of Leh district for achieving 100 percent digitization of banking operations . Digital banking refers to the electronic banking service provided online by a bank for its financial, banking and other transactions through electronic devices.

16. Sanjay Kumar takes over as head of RailTel 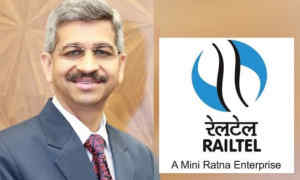 Sanjay Kumar has taken over as the chairman and managing director of RailTel , a railway undertaking . RailTel Corporation of India Limited gave this information. Prior to this he was Director (Network Planning & Marketing) in RailTel itself. He also held the additional charge of Director (Projects, Operations & Maintenance) as Director.

17. Amazon ties up with Amp Energy to set up its first solar project in India 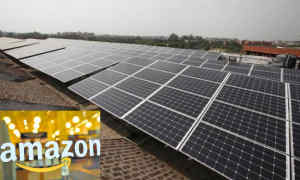 Amazon said that its first solar farm will be located in India. Three solar power plants with a combined capacity of 420 megawatts (MW) will be built by Amazon, the largest e-commerce company in Rajasthan . With Amp Energy , Amazon has contracted 210 MW and 110 MW of projects with Renew Power and Brookfield Renewables, respectively. 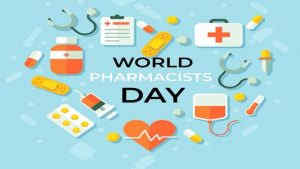 World Pharmacists Day is celebrated every year on 25 September across the world . Let us tell you that whenever a person is sick, he goes to the doctor and the doctor prescribes him some medicines, for which you have to go to the pharmacist. With the aim of attracting attention to these pharmacies, this day was started to be celebrated. 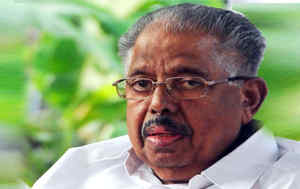