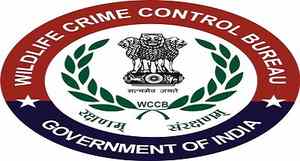 Wildlife Crime Control Bureau- WCCB received the Asia Environment Enforcement Award -2020 , given by the United Nations Environment Program . Giving this information, Environment Minister Prakash Javadekar said that the WCCB has received this award twice in three years for its commitment to curb wildlife crimes in India. The Wildlife Crime Control Bureau has been awarded this year in the Innovation category. Earlier in the year 2018, the Bureau was also awarded in this category. 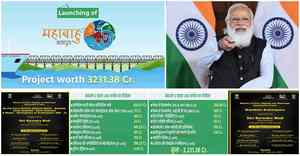 The Prime Minister, Shri Narendra Modi launched the ‘ Mahabahu-Brahmaputra ‘ in Assam and laid the foundation stone for two bridges. Union Road Transport and Highways Minister on the occasion; Union Minister of Law and Justice, Communications, Electronics and Information Technology; The Minister of State for Ports, Shipping and Waterways and the Chief Minister of Assam and Meghalaya were present. On the occasion of the inauguration of ‘Mahabahu-Brahmaputra’, he inaugurated the Ro-Pax ship service between Nemati-Majuli Island, North Guwahati-South Guwahati and Dhubri-Hatsingimari . He also visited the Inland Water Transport (IWT) terminal at Jogighopa and various tourist jetties on the Brahmaputra River.And launched a digital solution for Ease of Doing-Business. On the occasion, the Prime Minister congratulated the Mising community for the agriculture-related Ali-Aye-Ligang festival , which was celebrated on 17 February. 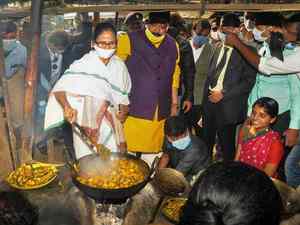 Recently, West Bengal Chief Minister Mamata Banerjee said Rs 5 for the poor and destitute on the nominal cost of subsidized cooked food “to provide mother’Canteen is launched. Under this new scheme, the state government will give a subsidy of Rs 15 per person per meal in the canteen, while people will have to pay Rs 5. In the budget presented by the Chief Minister earlier this month, Rs 100 crore has been allocated for this scheme. The ‘Maa’ canteen will be operated by the state self-help groups with the help of the Department of Urban Development and Municipal Affairs. It is important to note that since the pandemic, the concern about food security has become more serious in the entire world including India, in such a situation, this scheme of the Government of West Bengal should prove to be very important to ensure food security for the poor and relatively sensitive people of the state. Can.

4. The ‘Examination on Discussion’ program with the Prime Minister will be available online to all students of the world. 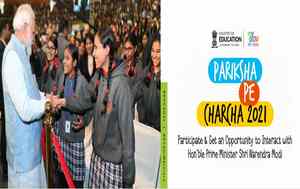 Union Education Minister Ramesh Pokhriyal Nishank has said that the fourth edition of the Prime Minister’s dialogue program with school students, teachers and parents – the discussion on the exam , will be held next month. The registration process for the discussion on the examination has started and it will run till 14 March. This time the program will be through virtual channels. The participants of the program will be selected through an online competition to be held on the MyGov platform. This time the program will be available to all the students of the world and it will be completely online. In a tweet, Mr. Modi appealed to the students to join their exams without smiling. 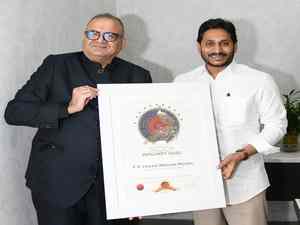 Andhra Pradesh Chief Minister, YS Jagan Mohan Reddy on Skoch Chief Minister of the Year Award has been awarded. The award has been conferred to the CM personally by Chairman, Skoch Group, Sameer Kochhar in Tadepalli, Andhra Pradesh. The award selection was based on a study of project-level outcomes in various states. Similarly, the government has taken the initiative to respond to COVID-19 and has shown desired results. All of the above and more is evident in a year-long study of 123 projects in regions of Andhra Pradesh. The state has taken several revolutionary measures in the last two years to make governance more efficient and transparent. Innovative measures have been taken in the areas, the credit of which goes to the Chief Minister. 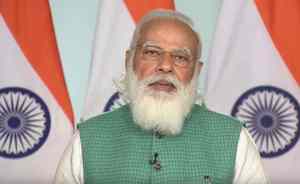 Prime Minister, Shri Narendra Modi along with ten neighboring countries – Afghanistan, Bangladesh, Bhutan, Maldives, Mauritius, Nepal, Pakistan, Seychelles, Sri Lanka – ” Kovid-19 Management: Experience, Good Practices and Way Forward”Addressed the workshop organized on the subject. It was attended by health sector personalities, experts and officials from ten neighboring countries. Officers and experts from India also attended the workshop. Calling upon countries to step up ambitions, the Prime Minister suggested creating special visas for doctors and nurses so that doctors and nurses could immediately visit the area in case of an emergency. He asked if our civil aviation ministry could coordinate for a regional air ambulance agreement for medical emergencies? The Prime Minister suggested that we could mix, compile and study the data about the effect of Kovid-19 vaccine in our population. He said that technology assistants could build regional networks to encourage epidemiology to prevent future epidemics. 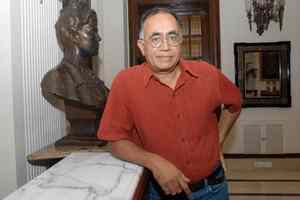 The new novel ‘ ASOCA: A Sutra ‘ by award-winning writer Irwin Allen Seeley , which is a fictional memoir of the great emperor Ashoka. The novel will be presented as a fictional memoir of the great emperor Ashoka, the emperor who ruled most of the Indian subcontinent and was instrumental in the spread of Buddhism from India to other parts of Asia in the third century BCE. was. It will be published by Penguin Random House India. Earlier, Penguin had published the thirtieth-anniversary edition of Seeley’s critically acclaimed debut novel The Trotter-Nama and is the author’s second book to be published by PRH. The book will be released in July 2021 under the Viking imprint of Penguin.

8. Introduction of instruction manuals and software applications along with questionnaires for five all-India surveys 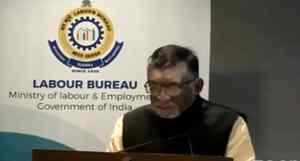 Labor and Employment Minister Santosh Kumar Gangwar launched the Guidelines Manual and software application along with questionnaires for five all-India surveys about labor . On this occasion, he said that statistics regarding all aspects of labor are important in policy making, especially in the coronary period. He said that the five All India Surveys have an important role in providing data at the national level about employment generated in migrant workers, domestic workers and businesses and in the transport sector. 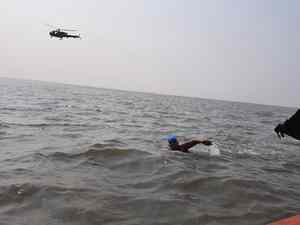 Miss Jiah Rai , the 12-year-old daughter of naval sailor Madan Rai, created history on 17 February 2021 by swimming 36 kilometers in 8 hours and 40 minutes from Bandra-Worli Sea Link to Gateway of India . He autismpectrum disorder (ASD)And Jia dedicated her achievement to spread awareness about it. This swimming competition was organized under the supervision of Maharashtra Swimming Association, a recognized body of Swimming Federation of India. The event was also linked to the Fit India Movement by the Ministry of Youth Affairs and Sports. Miss Jia Rai had earlier traveled 14 km for the Elephanta Island Gateway of India on 15 February 2020, swimming 3 hours 27 minutes and thirty seconds and swimming in Open Waters suffering from ASD as the youngest swimmer 14 km. Set a world record of 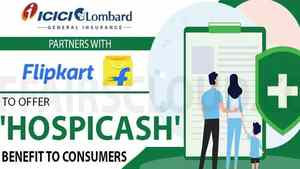 E-commerce company Flipkart has partnered with ICICI Lombard to launch ‘ Group Safeguard ‘ insurance, a group health insurance policy for its customers . Group Safeguards, daily cash benefits will start at Rs 500, and ‘ Hospicash ‘ benefits for Flipkart consumers . This insurance product will enable consumers to pay every day of hospitalization. The prescribed daily amount will enable consumers to pay for incidental medical or emergency expenses. The cost of insurance is flexible and it will remain paperless; This will cover both accidental hospitalization or planned surgery / treatment. 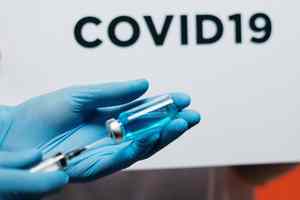 UN Secretary-General Antonio Guterres called the G-20 countries a ” global COVID-19 vaccination plan ” on 17 February 2020.Is asked to prepare. The United Nations asked it to do so, as well as it condemned the wildly uneven and inappropriate distribution of COVID-19 vaccines in various countries. He said, 10 wealthy countries have received 75 percent of global vaccination worldwide. Given that this is an important moment, thus, vaccine parity is the largest ethical test for the global community. He noted that 130 poor countries in the world have not received a single dose of the vaccine. He stressed the need for global cooperation to make equal distribution and access possible. 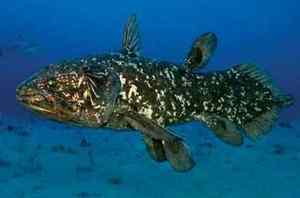 Recently a group of researchers in the ‘ Kolackanth / coelacanth is’ (Coelacanth) called for giant fish fossils, the ” living fossilIs considered a prime example of ‘. The coelacanth / caulacanth is believed to be about 66 million years old and belongs to the Cretaceous era. The ‘coelacanth / seoulacanth’ is an organism inhabiting depths 2,300 feet below sea surface. It is believed to have gone extinct with dinosaurs 65 million years ago. With its discovery in the year 1938, a debate started about how these lobe-fin fishes are found suitable in the evolution of terrestrial animals. So far only two known species of ‘coelacanth / ceulacanth’ exist: the first species is found near the Comoros Islands off the east coast of Africa and the second in the island of Sulawesi, Indonesia. Living fossils are such organisms, Which have remained unchanged since early geological times and whose closely related organisms have often become extinct. Horseshoe crab and ginkgo trees are also examples of living fossils in addition to coelacanth / seoulacanth. However, researchers in a new study have found that coelacanth / seoulacanth, together with other species 10 million years ago, acquired 62 new genes. They are actually developing, although the process of development is comparatively slow.

General Interview Questions Anushka_Academy - June 19, 2021
0
Government job interview process After you make it through the online application round you, and probably a dozen other applicants, will be invited for the...

Editorialthe/Hindu Anushka_Academy - June 19, 2021
0
TOPIC – Old  and slow Ever since Australia and England played the first-ever Test at Melbourne in March 1877, cricket’s longest format has constantly evolved. Timeless Tests were...