1. “In Our Lifetime” campaign launched by India at COP 27, Sharm el-Sheikh 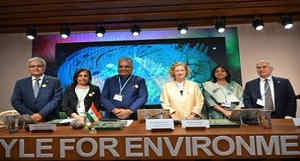 Ministry of Environment Forest and Climate Change and United Nations Development Program ( UNDP )Under the National Museum of Natural History ( NMNH ) jointly encouraged youth between the ages of 18 and 23 to become message carriers of sustainable lifestyles “Has launched the In Our Lifetime “campaign। The campaign envisions youth around the world recognizing the youth of climate action initiatives that are ‘lifestyle for the environment’ (LiFE coincides with the concept of )। It was launched at a side event at the India Pavilion at COP 27, Sharm el-Sheikh। A brief program on “Understanding the Concept of Life” was held at the India Pavilion at COP 27। It was hosted jointly by the United Nations ( in India and the United Nations ) India। MOEFCC – UNDP abstract collection during the program ‘From effort to effect – Mindless Consumption to Mindful Utilization’Released। This collection highlights India’s best-in-law work systems, Which incorporates the nature of life in the following areas and highlights the major behavior change framework।

2. Natasa Pirak Musar was elected the first female president of the country in Slovenia 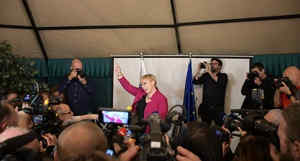 Slovenia In the second round of elections Conservative Defeat opponent Natasa Pirak Musar First female president of the country Have been selected। The Election Commission of Slovenia has said that Ms. Pirak Musar garnered around 54 percent of the vote while her rival Mr. Logar received 46 percent of the vote। The country has a population of 20 lakhs and polled 49 decimal nine percent। Ms. Natasa Pirak Musar is a journalist and lawyer and defeated former foreign minister and politics veteran Anze Logar। Mouser ( 54 ) Yugoslavia’s dissolution in 1991 Slovenia will be the first female president to come into existence as an independent country। A prominent lawyer, Pirk Musser, former American First Lady in copyright and other matters in Slovenia Melania TrumpWas represented। 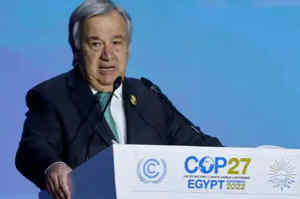 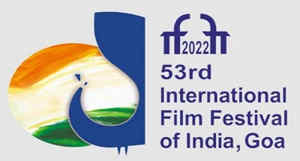 Spanish Film director and writer Carlos Saura to Goa in 53rd Indian International Film Festival in Satyajit Ray Lifetime Achievement Award 2022 Will be awarded। Minister of State for Information and Broadcasting El murugan Gave this information in New Delhi। Mr. Murugan reported that the children’s film package is being presented for the first time, suggested by UNICEF। This will include screening of about seven films। Mr. L. Murugan said that the first edition of the pavilion will also be introduced this year keeping in mind the major international markets like Marche du Cannes, including the country’s film industry and State government officials will be involved। 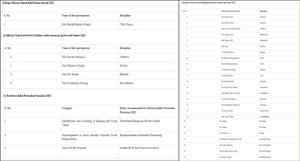 National sports awards Has been announced। Table tennis player Sharat Kamal Anchata to Khel Ratna Award Has been selected for। Ministry of Youth Affairs and Sports Announced these awards। Arjun Award for 25 players Has been selected। Dronecharya Award for Five coaches Three coaches will be awarded in the Lifetime category। Four players to Dhyanchand Award will be given। President Draupadi Murmu 30 November Will give these awards to all players and coaches। this year First time, online application only Were invited। Seema Puniya, Target Sen, Nikhat Zarin, R. Pragyananda, Deep Grace Ekka and Sushila Devi Arjuna are the players to be awarded the award। Dhyanchand Award Ashwini Akunji, C. Dharmveer Singh, B. C. Suresh and Neer Bahadur will be given to Gurung। Trans Stadia Enterprises, Kalinga Institute of Industrial Technology and Ladakh Ski and Snowboard Association to National Sports Incentive Award It is recommended to be given। Molana Abdul Kalam Trophy Amritsar Gurunanak Dev University Will be given to। 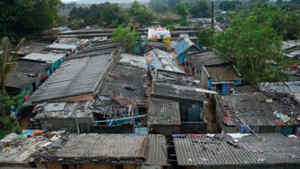 Odisha Chief Minister New Patnaik Said that his State slum free till December 2023 Will be done and all slums will be developed as model colonies। Mr. Patnaik initiated a program to give land rights to the slum dwellers of the state। On this occasion, he said that drone surveys have been started in five municipal corporations of the state for this। To fulfill this objective, an agreement was signed between the Jaga Mission and the Tata Steel Foundation in the presence of the Chief Minister and the Tata Steel Foundation will provide technical support। 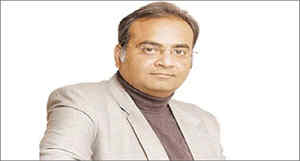 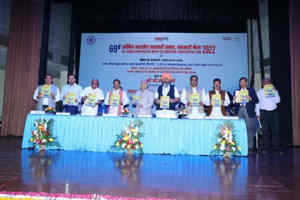 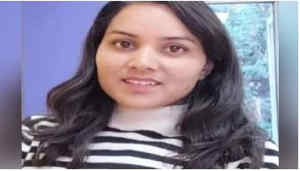 Himachal Pradesh A Fans husband doing PhD in Science from University Medhavi Divyang student Anjana Thakur Nagpur Getting into repute Indian Science Congress in Shimla Chapter of Science Congress Association Will represent। She is also a Junior Research Fellow of CSIR। In the program, he will also have the opportunity to meet the world’s renowned and Nobel Prize awarded scientists। This time theme of the conference is Science and Technology and Women’s Empowerment for sustainable development। Anjana Thakur is originally from the Pangana of Karasog। 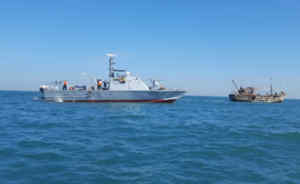 11. Verse Mukherjee was declared the winner of India under the title ‘India on the Center Stage’ for his inspiring doodle 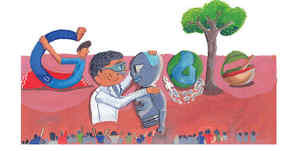 recently Google Ne Google For Doodle 2022 Competition Announced the winner of। This year of Kolkata Verse Mukherjee To their inspiring doodles ‘India on the center stage‘ The title has been declared the winner for India। Shloka, sharing his doodle, wrote, “In the next 25 years, India’s scientists will develop indigenous eco-friendly robots for the betterment of humanity। India will travel regularly from Earth to space। India will be stronger in the coming years with more development in Yoga and Ayurveda। This year’s competition received more than 115,000 entries of children from class 1 to 10 from more than 100 cities in India, with the theme being- “I will have India in the next 25 years…“। The adjudicator panel included actor, filmmaker Nina Gupta, editor-in-chief of Tinkle Comics, Kuriyakos Vassian, YouTube Creators Slaypoint and artist and entrepreneur Alika Bhat as well as the Google Doodle team। 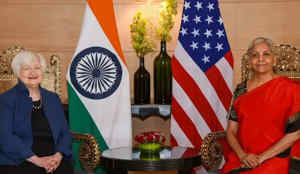 America Finance Department of Italy, Mexico, Thailand, Vietnam with India Key trading partners Currency monitoring list (Currency is removed from the monitoring list )। India was on this list for the last two years। Under this arrangement, activities and macroeconomic policies regarding the currency of major trading partners are closely monitored। US Finance Minister Janet Yellen ( Janet Yellen) held a meeting with Finance Minister Nirmala Sitaraman with her visit to India। On this day, the US Department of Finance has taken this step। 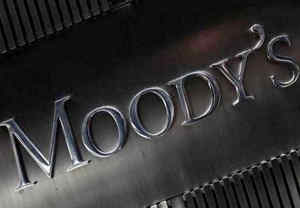 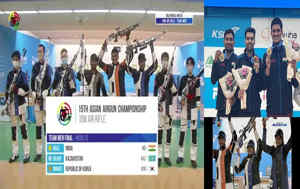 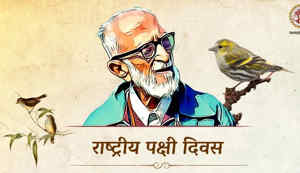 National Bird Day is celebrated every year on ’12 November। 12 November Dr. Salim Ali’s Birth Day, he was a world renowned bird expert and naturalist। He was the first person from India who systematically conducted bird surveys across India and his books on birds helped a lot in the development of bird science in India Of। In India, they were also known as “bird humans। The birth day of bird expert Salim Ali has been declared as National Bird Day by the ‘Government of India। Salim Ali had written many books related to birds, ‘Birds of India’ is the most popular book in them। The postage department has also issued postage stamps in his memory। Salim Ali was awarded ‘Padambhushan’ in the year 1958 and ‘Padwibhushan’ in the year 1976। 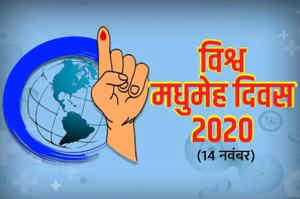 World diabetes day Per year 14 November Is celebrated। It is a non-communicable disease caused by Not producing enough insulin by the pancreas The insulin produced by the body is not to be used effectively। There are two types: Type 1 diabetes and Type 2 diabetes।Obesity and lack of exercise are the main causes of type-2 diabetes। Diabetes is a growing challenge in India, with an estimated 8.7% of the population aged between 20 and 70 years। The major factors of diabetes and other non-communicable diseases are increasing urbanization, unbalanced lifestyle, unhealthy diet etc। Globally, about 6% of the world’s population ie more than 420 million people suffer from type-1 or type-2 diabetes। Insulin is a peptide hormone secreted by the pancreas that increases cellular glucos, carbohydrates, lipids, Protein helps maintain normal blood sugar levels by regulating metabolism and promoting cell division and growth। Cancer, diabetes in the year 2010,National program launched for the prevention and control of heart diseases and stroke ( NPCDCS ) aims to assist in the diagnosis and cost-effective treatment of diabetes at various levels of health care is। 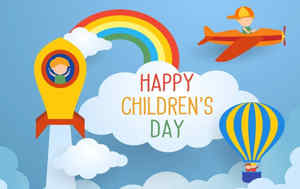 To raise awareness about education, care and rights of children, every year of the country First Prime Minister Pandit Jawaharlal Nehru On the jubilee 14 November to Children’s Day Is organized। 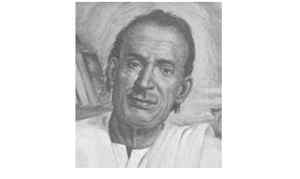 Recently the Prime Minister Acharya Kripalani Was paid tribute to his birth anniversary। Their birth Sindh ( Hyderabad ) on November 11,1888 Happened in। His original name Jeevataram Bhagandas Kripalani Was, but he was known as Acharya Kripalani। that one Freedom fighter, Indian politician and academician Were। From 1912 to 1927 he Freedom movement Prior to fully joining, he did teaching at various places। Around the year 1922 when they Mahatma Gandhi established by Gujarat Vidyapith While teaching in, he was ‘Acharya‘ Nickname received। kind Vinoba Bhave With in the 1970s Environmental protection and rescue activities Stayed involved in। that Non-cooperation movement ( 1920-22 ) and Civil disobedience movement ( started in 1930 ) And Quit India Movement (1942) Be a part of। At the time of independence they Indian National Congress ( INC ) Was the president of। They did india Interim Government (1946-1947 ) and Constituent Assembly of India Contributed to।