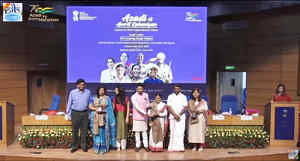 Information and Broadcasting Minister Anurag Thakur released a short video collection titled ‘ Azadi Ki Amrit Kahaniyan ‘. It has been prepared in association with Neflix India . Seven Indian women in thisThere are inspiring short stories about people who did some unimaginable, unique and outstanding works for the country. The video depicts environmentalist and Padma awardee Basanti Devi, who led an awareness campaign to save the Kosi river in Uttarakhand. The contribution of climber Anshu Jamsenpa is also featured in these short videos. She is the first woman in the world to have conquered Mount Everest twice in a single season. The series also tells the story of Harshini Kanhekar, who was included in the list of women honored under Prime Minister Narendra Modi’s Bharat Ki Laxmi campaign. Shri Thakur said that Netflix will produce 25 videos on women empowerment, environment and sustainable development and important days. He said that Netflix will also make short two-minute films for the ministry. 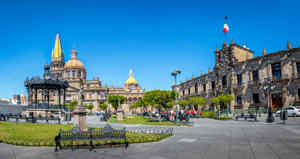 The United Nations Educational, Scientific and Cultural Organization (UNESCO) selects a World Book Capital every year and a variety of activities are organized in this selected capital city to encourage people to read. In the year 2022, Guadalajara, Mexico has been selected as the World Book Capital. Recently, the United Nations Organization shared information about the World Digital Library on social media as part of the World Book Day event, which provides free access to thousands of books, documents and photographs from around the world. 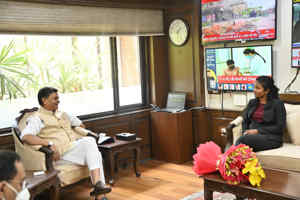 The Union Minister of Power and New & Renewable Energy, Shri RK Singh called on the Minister of Environment, Climate Change and Technology of the Republic of Maldives , Ms. Aminath Shouna . Shri Singh appreciated the resolve of the Government of Maldives to achieve 100% zero emission target by 2030. During this meeting, both the leaders proposed two MoUs. First – on energy cooperation and second – transmission interconnection under the MoU One Sun, One World, One Grid (OSOWOG )done on. India and Maldives have proposed to establish transmission interconnections for renewable energy transfer as part of the One Sun, One World and One Grid initiative to facilitate Maldives’ electricity transmission programme. A draft agreement is being prepared for the Memorandum of Understanding on Transmission Interconnection, under which a technical team from India will visit Maldives to assess its technical feasibility. Thereafter, a Detailed Project Report (DPR) will be prepared jointly with agencies in India and Maldives, which includes undersea cable route survey and network augmentation in Male. 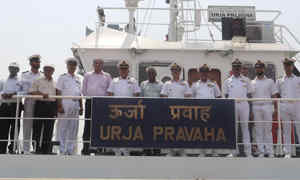 5.India produced 301.9 million tonnes of steel during January-March this year with a growth of 5.9 per cent 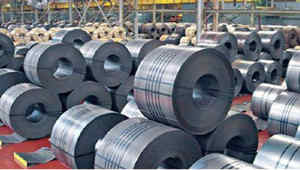 India has produced 31.9 million tonnes of steel during January to March this year with a growth of 5.9% . In March alone, steel production stood at 19 million tonnes with a growth rate of 4.4%. According to the data released by the World Steel Association , India is the only country among the top 10 steel producing countries in the world , which has registered an increase in steel production in the period January to March as compared to the same period last year. Brazil is the only other country in the top 10 countries to have registered an increase in the month of March.

The All India Household Consumer Expenditure Survey , which is conducted every five years by the National Statistical Office (NSO) , will be resumed this year after a long gap. Since 2011-12 , there is no official estimate on per capita household expenditure in the country. This estimate is used to examine poverty levels in different parts of the country and to review other economic indicators such as gross domestic product (GDP). The previous survey in 2017-18 was scrapped by the government citing issues in data quality. The survey for 2022-23 will be started from July and will be completed by June 2023. 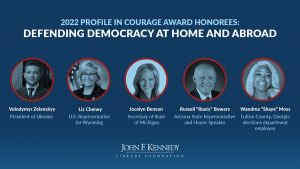 Zelensky was chosen because, among us, the Russian military’s relentless assault on cities and towns in Ukraine, he put the spirit, patriotism and relentless sacrifice of the Ukrainian people in the fight for life-or-death for their country. . 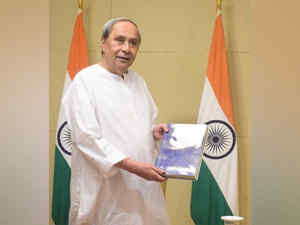 9.India Participates as Guest of Honor at Paris Book Festival 2022 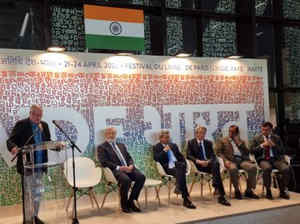 India was nominated as the Chief Guest at the Paris Book Festival 2022 to be held from April 21 to 24, 2022 under the joint statement of Prime Minister Shri Narendra Modi -President Emmanuel Macron released in 2018 during the visit of the President of France to New Delhi . has been done. The Paris Book Festival was inaugurated on 21st April, 2022 and the India Pavilion of Paris Book Festival was inaugurated on the same day. The India Pavilion, designed by the National Institute of Design (NID), houses over 15 digital and physical exhibitions, showcasing over 400 books published in various Indian languages ​​and representing 65 Indian publishers.

10.Three crore programs organized across the nation during Poshan Pakhwada 2022 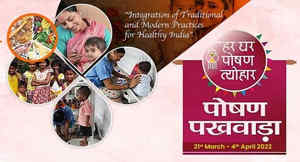 During Poshan Pakhwada 2022 , three crore programs were organized across the nation . The Ministry of Women and Child Development celebrated the fourth ‘ Poshan Pakhwada ‘ from March 21 to April 4 . The focus of this year’s ‘Poshan Pakhwada’ is in two broad areas – measurement of height and weight of beneficiary children up to the age of six years and gender sensitive water management, traditional food for healthy mothers and children especially from tribal areas and related to anemia. was on activities.

11.Russia announces ceasefire in the vicinity of Azovstal steel plant in Mariupol 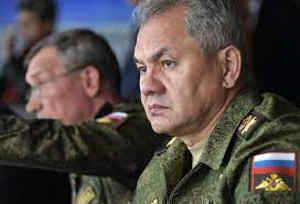 Russia ‘s Defense Ministry has announced a ceasefire in the vicinity of the Azovstal steel plant in Mariupol to help evacuate civilians from the industrial area. Russia said last week that it had taken full control of the strategically important eastern Ukrainian city of Mariupol, except in the Azovstal industrial area. President Vladimir Putin ordered a blockade of the steel plant where hundreds of civilians are reportedly taking refuge with Ukrainian soldiers.

12.PM participates in the inaugural program of the year-long joint celebrations of 90th anniversary of Sivagiri Teerthadanam and Golden Jubilee of Brahmo Vidyalaya 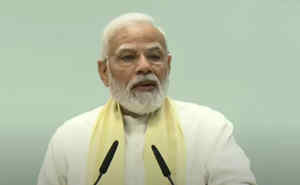 The Prime Minister , Shri Narendra Modi , attended the inauguration of the year-long joint celebrations of the 90th anniversary of Shivgiri Teerth and Golden Jubilee of Brahmo Vidyalaya at 7, Lok Kalyan Marg in Delhi . He also released the logo of the year-long joint celebrations. Sivagiri Teerthadanam and Brahmo Vidyalaya, both great social reformer Sree Narayana GuruUnder the blessings and guidance of It is noteworthy that Sivagiri Teerthadanam is celebrated every year from 30 December to 1 January at Sivagiri, Thiruvananthapuram. According to Sree Narayana Guru, the purpose of Tirthadanam is to create holistic knowledge in people. Along with this, the pilgrimage has to cooperate for all round development and prosperity. Therefore Tirthadanam emphasizes on education, cleanliness, purity, handicrafts, trade and commerce, agriculture, science and technology and organized effort. This pilgrimage was started in 1933 with a handful of devotees, but now it has become included in the major programs of South India. Every year, irrespective of caste, faith, religion and language, devotees from all over the world come to Sivagiri and take pilgrimage. Sree Narayana Guru had envisioned such a place, Where the principles of all religions should be taught with a sense of peace and equal respect. The Brahma Vidyalaya of Sivagiri was established to convert this vision into reality. The Brahmo Vidyalaya offers a seven-year course on Indian Philosophy, which includes the works of Sree Narayana Guru and texts from all the important religions around the world. 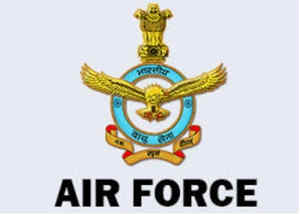 A National Level Logistics Seminar is being organized by the Indian Air Force on 28 April 2022 at Air Force Auditorium , New Delhi . The Chief of Air Staff will inaugurate the seminar and will also deliver the keynote address during the inaugural session. The theme of the seminar is ‘ Orchestrating Logistics Support for Air Combat Operations ‘. Leading experts from government, industry and think tanks will deliberate on the National Logistics Policy and its use of existing technologies such as AI, ML, Blockchain and IoT. When these dimensions are incorporated into military logistics, it will have a transformative impact on the way supply chain management works in the Indian Air Force.

14.MoU signed between NHLML and State Government for construction of ropeway in Himachal Pradesh under Parvatmala Yojana 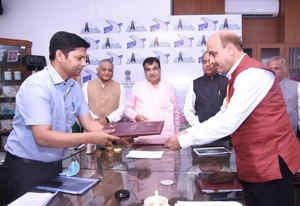 Union Minister of Road Transport & Highways Shri Nitin Gadkari , Chief Minister of Himachal Pradesh Shri Jai Ram Thakur , Minister of State for Road Transport & Highways Shri VK Singh NHLML (National Highway Logistics Management Limited) for construction of Ropeway in Himachal Pradesh under the ambitious Parvatmala Yojana Witnessed the signing of the Memorandum of Understanding between the Government of Himachal Pradesh and Himachal Pradesh. This is a significant MoU that will facilitate a unique, eco-friendly, beautiful and seamless travel experience for the tourists. By leveraging world-class technology, the state will have a total cost of Rs 3,232 crore with a total length of 57.1 kms .7 ropeway projects will be constructed. 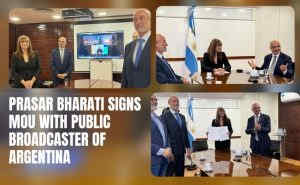 Prasar Bharati has signed an MoU with the public broadcaster of Argentina Radio Television Argentina (RTA) for cooperation in the field of broadcasting. The MoU covers multiple fronts in media and broadcasting which is set to exemplify the communication and transmission networking of both the countries. India and Argentina share cordial relations and developmental partnership in the fields of political, economic, scientific and technical cooperation.

16.UK-India to work together in nuclear energy and innovation 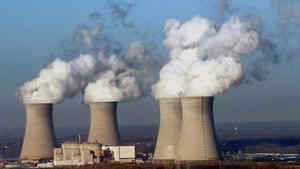 During the visit of Prime Minister of United Kingdom Boris Johnson to India, the two countries signed the Global Innovation Partnership and Nuclear Energy Partnership .But two Memorandum of Understanding (MoUs) have been signed between the government to the government. A Memorandum of Understanding was signed between India’s Department of Atomic Energy and the UK’s Department of Business, Energy and Industrial Strategy on Cooperation on Cooperation on Global Center for Nuclear Energy Partnership (GCNEP). The two countries have reaffirmed their desire to strengthen the partnership on civil nuclear cooperation. Another MoU was also signed between the Ministry of External Affairs of India and the Office of Foreign Affairs, Commonwealth and Development of the United Kingdom on the implementation of the Global Innovation Partnership. The cooperation has been signed with the aim of jointly promoting training and research on radioactive applications, nuclear energy studies and nuclear safety. 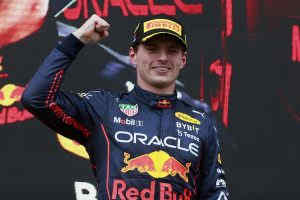