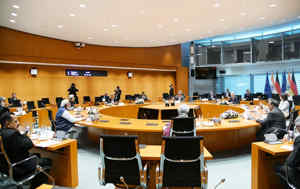 Prime Minister Narendra Modi and German Chancellor Olaf Scholz signed a Joint Declaration of Intent on the Green and Sustainable Development Partnership at the India-Germany Intergovernmental Consultation in Berlin . Many ministers of both the countries also participated in this biennial consultation. Germany made an advance commitment of ten billion euros in additional development assistance by 2030 for sustainable development and climate cooperation . Prime Minister Modi thanked Germany for this. The Prime Minister and German Chancellor Olaf Scholz chaired the trade talks. On this occasion, Prime Minister Modi invited the industry to invest in India. 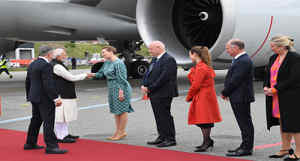 Prime Minister Narendra Modi and Danish Prime Minister Mette Frederiksen held diplomatic level talks. He reviewed the Green Strategic Partnership. This partnership is the first of its kind between India and Denmark. Mr Modi arrived in Copenhagen , the capital of Denmark, on the second leg of his three European countries visit . He was received at the airport by the Prime Minister of Denmark, Mette Frederiksen. Several agreements were signed between the two countries in various fields. These include the Center of Excellence and Cooperation in the Water Resources Sector and Letters of Intent for Smart Laboratories in India. PM with Prime Ministers of Denmark, Iceland, Sweden and Norway, 2nd India-Nordic Summitwill participate in 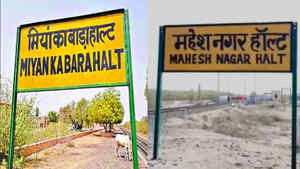 In an official name-change ceremony held on April 30, 2022, the name of ‘ Mian Ka Bada ‘ railway station in Balotra area of ​​Barmer district of Rajasthan was changed to ” Mahesh Nagar Halt “. Union Minister of Jal Shakti Ministry Gajendra Singh Shekhawat , Union Minister of State for Agriculture and Farmers Welfare Kailash Choudhary and others attended the function. 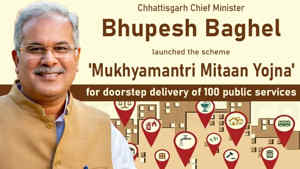 On 1 May 2022, Chhattisgarh Chief Minister (CM) Bhupesh Baghel launched ‘ Mukhyamantri Mitan Yojana ‘ (Mitan means friend), which will be implemented on a pilot basis in 14 municipal corporations including Raipur, Durg, Bilaspur and Rajnandgaon in Chhattisgarh . Under this scheme the residents of Chhattisgarh can avail around 100 public services at their doorstep. In the first phase, 13 services in 14 municipal areas have been included under the ‘Mitan’ scheme, as announced by the CM in his budget speech for the financial year 2022-23. Under the scheme people can contact ‘Mitan’ (Designated Person) on the toll free number (14545) for the service. 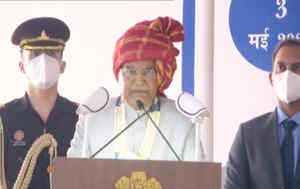 President Ram Nath Kovind laid the foundation stone of Bhagwan Mahaveer Super-Specialty Hospital in Rohini , New Delhi . Shri Kovind said that it is very auspicious to lay the foundation stone on the occasion of Akshaya Tritiya . He said that service work is given prominence in Jainism . He said that by the year 2023, a state-of-the-art 250-bed Bhagwan Mahavir Super Specialty Hospital would be ready. He said that it is a matter of happiness that in this super specialty hospital, high quality health services to all sections of the society will be made available at affordable rates and free of cost to the poor. 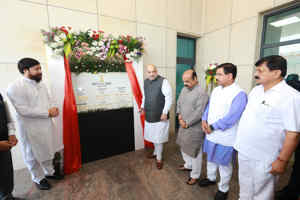 The Union Minister for Home and Cooperation, Shri Amit Shah inaugurated the National Intelligence Grid (NATGRID) complex in Bengaluru . The Chief Minister of Karnataka Shri Basavaraj Bommai , Karnataka Home Minister Shri Araga Gyanendra, Minister of State for Home Shri Nishith Pramanik and Union Home Secretary were also present in the inaugural ceremony . NATGRID CEO informed that the services of NATGRID Solution are 11 Central Agencies and Police of all States and Union Territories. will be available on It will link user agencies with data holders, giving them access to real-time information needed for intelligence services and investigations. For the development of NATGRID solution, C-DAC Pune has been roped in as technology partner and IIT, Bhilai as Plan Management Consultant. National Intelligence Grid (NATGRID) is a powerful intelligence aggregation mechanism. The project, estimated to cost around Rs 3400 crore, was conceived after the 26/11 Mumbai terror attack. NATGRID will collect data related to immigration, entry and departure, air travel, credit card purchases, banking and financial transactions, tax payers, telecommunications and train passengers. 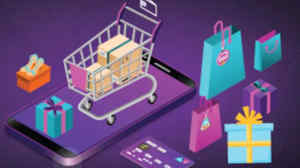 The government has launched a pilot project, Open Network for Digital Commerce (ONDC) , a neutral, open source, non-profit, e-commerce platform aimed at mom- and-travel in cities like Delhi, Bengaluru, Bhopal, Coimbatore and Shillong . pop shops (small, family-owned or independent businesses) shops and grocery storesTo empower. 50 (Targeted) retailers and sellers will get to showcase their products on the app of vendors such as GoFrugal, GrowthFalcons, Digit and eSamudaay that are connected to the ONDC network. The products will be delivered through Goodbox, the only logistics provider that has been onboarded so far. For payment, buyers can use PhonePe and Paytm to access the network and buy goods from sellers. ONDC has an ambitious target of connecting around 30 million vendors spread across 100 cities in six months. 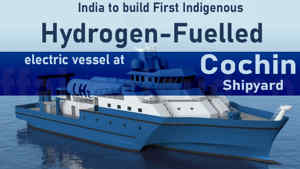 The Ministry of Ports, Shipping and Waterways (MoPSW) is set to build India’s first indigenous hydrogen-fueled electric ships at Cochin Shipyard Limited (CSL) . The Hydrogen Fuel Cell Vessel called Fuel Cell Electric Vessel (FCEV) based on Low Temperature Proton Exchange Membrane Technology (LT-PEM) is expected to cost around Rs 17.50 crore. 75% of the cost will be borne by the Government of India. 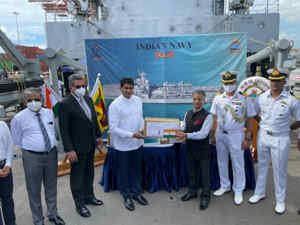 INS Ghariyal Security and Growth for All in the Region (Mission Sagar) IX with the broad objective of providing vital medical assistance to Sri Lanka during the current crisis reached Colombo on 29th April 2022 and distributed more than 760 kgs of vital life saving medicines of 107 types. The shipment was received by the Hon’ble Channa Jayasumana, Minister of Health of Sri Lanka and will be supplied to the University of Peradeniya Hospital. In line with the Government of India’s SAGAR approach – Security and Growth for All in the Region – the Indian Navy undertakes a number of deployments under the name ‘Mission Sagar’ to assist friendly maritime countries in the Indian Ocean region. Since May 2020, the Indian Navy has successfully completed eight such missions, with ten ships deployed in 18 friendly countries. 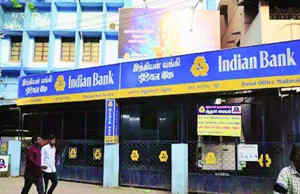 Religare Broking Limited has partnered with Spice Money Limited to provide access to a platform to invest in capital markets for people in rural India . This partnership will facilitate rural India to access demat accounts and invest in capital market related products. Under this partnership, Spice Money representatives will assist rural citizens to open demat accounts and apply for Life Insurance Corporation of India (LIC) of India’s Initial Public Offer (IPO) and invest in other products in the future.

12.Gaganyaan unmanned module will be injected in 170x408km 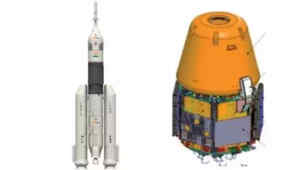 The Indian Space Research Organization (ISRO) , as part of its Manned Spacecraft (Gaganyaan) mission , has launched the Geosynchronous Satellite Launch Vehicle Mark 3 (GSLV-Mk3) or Human-Rated Launch Vehicle (HRLV) 170×408 km through 2023. (KM) has finalized the launch of the first unmanned mission or G1 in orbit . G2 will be the second unmanned mission after the G1 mission, both of which are precursors to the last manned mission, or H1. 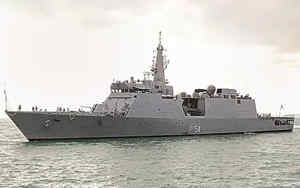 Bharat Heavy Electricals Limited (BHEL) signed a Memorandum of Understanding (MOU) with GE Power Conversion to develop and promote integrated electric propulsion systems for the Indian Navy . The MoU can take advantage of rapid incorporation of advanced technology in conjunction with indigenous manufacturing by the Indian Navy to promote ‘Atmanirbhar Bharat’. This increases the ship’s energy requirements, including propulsion, high-power sensors, service loads and pulse power for defense systems. GE’s naval technologies are shock-rated and proven over naval applications ranging from 3MW to 110MW, and include Includes naval electric motors and generators, switchboards, power converters, power management and automation and control systems. 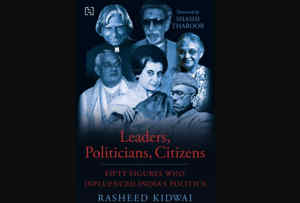 ” Leaders, Politicians, Citizens: Fifty Figures Who Influenced India’s Politics ” by writer-journalist Rashid Kidwai compiles the stories of 50 personalities who have influenced India’s political landscape. The book is published by Hachette India. The preface of the book has been written by Shashi Tharoor, Member of Parliament (MP) (Lok Sabha). The 50 celebrities included in the book are Teji Bachchan, Phoolan Devi, Indira Gandhi, Rajiv Gandhi, Jayalalithaa, APJ Abdul Kalam and Karunanidhi. 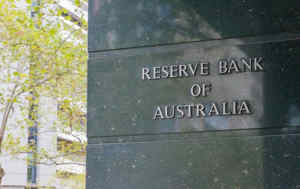 In Australia, the central bank has raised interest rates from zero two-five to zero three-five percent after more than a decade . Australia’s Central Bank Governor Philip Lowe said it was an opportune time to withdraw monetary concessions given to aid the Australian economy during the pandemic. The governor said inflation had risen faster than expected, yet the unemployment rate remained low and wages showed signs of improvement. 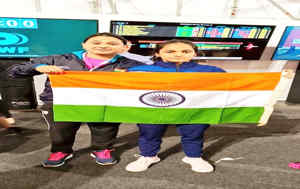 Harshada Sharad Garuda (affiliated from Maval in Pune district of Maharashtra) has created history by winning a gold medal at the IWF Junior World Championships in Heraklion , Greece in weightlifting . She has become the first Indian woman lifter to win a gold medal in this competition . Before Harshada, there are only two Indian players to win a medal in this championship. Mirabai Chanu won Bronze medal in 2013 and Achinta Sheuli last yearwon the silver medal. Harshada lifted 153 kg in the women’s 45 kg weight category, which included 70 kg in snatch and 83 kg in clean and jerk. Turkey’s Bektas Kansu won the silver medal while Moldova’s Teodora Luminita Hinku won the bronze medal. In this weight category, Anjali Patel finished fifth with a total lift of 148 kg including 67 kg in snatch and 81 kg in clean and jerk.