UDAIPUR: An outing in Fateh Sagar Lake turned tragic for a four-year-old girl who drowned after a speedboat capsizedduring a joy ride here on Monday afternoon.

The boat capsized after another one rammed into it from behind. Eight persons, including the boat operator, fell into the river and were rescued. However, the body of the girl was not found by the rescue team till late on Monday.

Ekta Saini, the victim, had taken the joy ride along with her parents in the speedboat when another boat hit them from behind, flooding the boat and throwing the passengers into the river. The victim’s father, Vidhyadhar Saini, sustained multiple and severe head injuries and is critical, sources said.

“There were two families of Sumit Sharma and Vidhyadhar Saini, both residents of Harmada, Loha Mandi in Jaipur, in the boat. They had come here for vacation. Sumit is a businessman while Saini is a chartered accountant by profession. Saini’s wife Deepika and daughter Ekta, Sumit’s wife Pooja, kids Chirag and Reshu and boat driver Mohsin were in the boat when the accident occurred,” said circle inspector Chandra Purohit, Ambamata police station.

All of the adults except children had worn life jackets, according to sources. Ekta, who was seated on her father’s lap, went deep into the water and who couldn’t be found by rescuers. All the others were safely pulled out of the water. Attempts by rescuers to find the child proved futile.

Meanwhile, the rescued were rushed to the hospital and the condition of all, except that of victim’s father, is said to be stable.
“The mother is in a state of shock. No FIR has been lodged yet, but we have started an investigation,” Purohit said.
Udaipur Mayor Chandra Singh Kothari too ordered a probe by the municipal corporation. “It is a very unfortunate incident not only for the aggrieved family but for our city. We will review the tender provisions and find out if the boat operator has committed any irregularities. Stringent action will be taken and we will make sure that no such incident happens in the future,” Kothari told TOI. 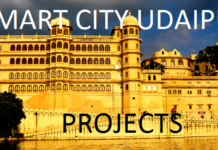